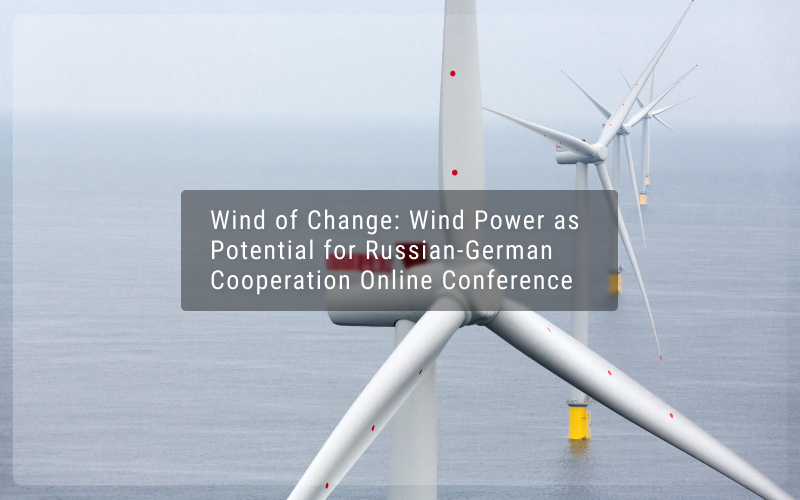 On December 2-3, 2020, an online conference on “Wind Power: Potential for Russian-German Cooperation” was held within the Wind Energy Hamburg exhibition. To support establishing business contacts between Russian and German wind-energy-related companies was named the main purpose of the event by the Russian-German Chamber of Commerce (a member of the RAWI).

RAWI acted as a co-organiser of the conference being one of the participants of the exhibition’s Russian National Pavilion.

At the conference, RAWI was represented by Roman Denisov, an analyst of the Association, a scientist of the Peter the Great St. Petersburg Polytechnic University. His presentation was devoted to the current state of the wind energy market in Russia, the prospects for its development after 2024, as well as the issue of Russian export interests in foreign wind energy markets.

On April 14, 2020, in Ulyanovsk, the first batch of 48 blades for wind turbines from the plant of Vestas Manufacturing Rus, created jointly with RUSNANO and the ULNANOTECH nanocentre, was solemnly shipped for export to Denmark.

Whereas, Christoph Seeholzer, Chairman of the Chamber of Commerce’s Power Engineering Committee said that in the future 3-5 years in Russia, wind energy companies may become a useful alternative to conventional generation in certain regions. There are now 8 wind power plants with a total capacity of 1021.8 MW operating in Russia.

For example, renewables accounts for 12% in the power balance of the Astrakhan Oblast. The largest wind cluster with a total capacity of 340 MW consisting of 80 wind turbines is under active construction and scheduled to be commissioned in December 2021.

According to a representative of the region, as soon as the project launches, the renewables’ share in the regional energy mix will reach 30%. According to the results of RES CDA auctions, the region will rank high becoming second in photovoltaics installed capacity and third in wind’s.

Rodion Surkov, Managing Director of the Russian Electrotechnical Group Ruselprom’s (a member of the RAWI) sales unit, spoke at the conference about the localisation efforts in Russia for wind turbine generators manufacture.

The joint project of the Group with Siemens and Enel allowed the leading Russian manufacturer of electromechanicals to acquire rich competences in manufacturing new equipment, starting from processing of design documentation, identifying local materials similar of more than 300 foreign ones, to development of in-house manufacturing processes, which required some machinery modernisation.

As a result, Ruselprom manufactured 2 prototypes and 24 production models in recordingly short time. The equipment has been installed, commissioned, and incorporated at all wind turbines operating at the Azovskaya wind farm site. In addition, the Group provides not only service and maintenance, but also electric machinery salvage. The option is relevant both in Russia and for the European wind power industry.

As part of the panel discussion moderated by Alexey Khokhlov, head of Power and Utilities of Energy Centre, Moscow School of Management SKOLKOVO, the participants discussed the current and potential opportunities for green energy trading and corporate market player demand.

Tibor Fischer, Director of Renewable Energies and Innovation in the Energy Transition at the Deutsche Energie-Agentur GmbH (dena), German Energy Agency, noted that globally the direct power purchase agreement scheme is a powerful tool stimulating the development of renewables. In 2019, global renewables projects expansion through PPA amounted to 19.6 GW of capacity, and in 2020 another 11.2 GW was built under this scheme, mainly solar and wind.

Roman Ishmukhametov, an Associate at Baker McKenzie, presented an overview of options for structuring corporate projects in various segments of the renewable energy market, obtaining preferences and creating additional cash flows within such projects.

At the same time, Vitaly Bodrov, Executive Director of Sberbank PJSC, voiced the priorities of the bank in working with companies in the energy industry:

– Development of the green agenda and the formation of product solutions for energy companies, which have included ESG in their development strategies,

– creation of packaged solutions to simplify and unify the terms of lending,

– technological solution in the scope of ESG: the bank is now actively working with the Market Council and the IREC association (a Russian branch) to create a blockchain platform for the circulation of green certificates, which will could group a new market in Russia,


One thought on “Wind of Change: Wind Power as Potential for Russian-German Cooperation Online Conference”