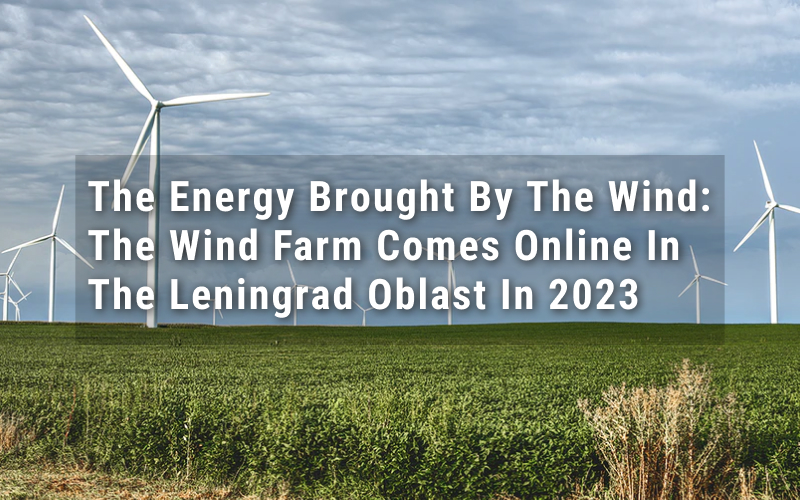 In the Volkhovsky District of the Leningrad Oblast, active preparatory work is underway for the construction and commissioning of the 68.4 MW wind farm. According to the initiators of this project, the wind farm (WPP) will start operating in 2023. The wind farm will sell electricity produced in the wholesale market. In addition, there are industrial enterprises in the region, which may use a portion of the capacity of the energy facility.

The area for the construction of the wind park is located near the village of Sviritsa in the Leningrad Oblast on an area of 1200 hectares, in close proximity to utility systems and power lines. This reduces the amount of capital investment in the wind farm infrastructure and simplifies the delivery of major equipment.

“The project, the investment value of which is 7.5 billion roubles, has already seen investements of several tens of millions, – the chairman of the Russian Association of Wind Power Industry (RAWI) Igor Bryzgunov said. – Now the infrastructure – roads and foundations – is being prepared. By the beginning of the next year, we expect to get a permit for the construction of the wind park itself.

According to the calculations of RAWI experts, the Leningrad Oblast is included in the list of promising regions for the development of wind energy. “The only problem is that it is difficult to find a site free from forests, – Bryzgunov said. – We have a lot of forests. And it is not always advisable to saw forests for wind farms in an energy surplus region. As for Russia as a whole, the widespread opinion about the small wind potential of our country is controversial. Moreover, thanks to innovative technologies, modern equipment for wind farms can be successfully operated almost throughout the entire territory of our country.”

Contrary to the opinion of skeptics, wind energy has been gaining momentum in the country for the fourth year already. At the same time, the young wind energy market is quite promising. According to experts’ calculations, the technical potential of the Russian wind energy industry – 1000 GW – is ten times higher than the amount of electricity produced by the entire power system of the country today. In other words, if all the existing energy sources suddenly disappeared, wind turbines, if built quickly, would cope.

However, at present the share of wind energy in Russia is about 1%. Only 190 MW of wind farms have been built in the country (for comparison: in Europe their capacity is 189 GW). On the world market, wind farms produce more electricity than the entire Russian energy sector, and their generation has already reached the same price level as thermal power plants.

Recently, thanks to the state support of wind energy projects, much has changed for the better in Russia. Investors’ interest in the wind energy market (in terms of production of wind turbines and construction of wind farms) is growing up by the second. And it is likely that by 2024 the share of wind energy in the country will increase from 1 to 4.5%. Of course, this is a drop in the ocean, but still the ‘wind started blowing in the right direction’.

“State support has given the Russian wind energy industry the necessary impetus for active growth, – Igor Bryzgunov made a point. – According to the requirements of the current legislation, state support in the industry is possible only if the production of equipment for wind power plants is localised in Russia by at least 65%.

Today, the market has formed three leading alliances of developers – utilities and international manufacturers of equipment for wind power plants.  Firstly, it is the alliance between PJSC Fortum and Rusnano, which cooperate with their Danish colleagues.  They are implementing a large-scale programme for the development of renewable energy in Russia.  The Wind Energy Development Fund they created in 2017 and 2018 was granted the right to build almost 2 GW of wind capacity. The wind parks are slated to be commissioned between 2019 and 2023.

Secondly, it is JSC NovaWind (Rosatom Group) and another Dutch partner. Third, PJSC Enel Russia, a division of the Italian company of the same name together with a well-known German-Spanish concern. Now, at the border of the Leningrad Oblast with St. Petersburg, in the Gorelovo industrial zone, the German mechanical engineers are engaged in the production of nacelles for wind farms. The first ready-made wind turbines will be available to customers in Russia as early as next year.

In other words, we are witnessing a massive campaign for building new wind farms in the country. Of course, the 200-700 MW annual wind farms are far China’s results, but the first step is always the hardest.

“Today, wind farms are mostly built in the south and northwest of the country. We haven’t reached the east yet, – Igor Bryzgunov said. – A total of 3,380 MW of wind farms will be built by 2024. And the fact that we are not just importing equipment, but creating an industry on our territory is worthy of respect.”

Russia’s first wind farm with a capacity of 35 MW was launched in 2017 in the Ulyanovsk Oblast. Later, another wind farm with the capacity of 50 MW was built on that territory. The list of new facilities includes construction of wind farms in Rostov Oblast (200 MW) and the Republic of Adygeya (150 MW). The cornet stone of construction of the Arktichesky Wind Farm with the capacity of more than 200 MW was laid in the Murmansk Oblast. In the long run, this largest renewable energy enterprise beyond the Arctic Circle will be able to produce about 750 million kWh per year, avoiding the emission of about 600 thousand tons of carbon dioxide into the atmosphere. The Kolskaya Wind Power Plant will be commissioned in 2021. Its construction is carried out by Enel Russia, and the technological partner in the construction of the wind park in the Murmansk Oblast is a well-known German company.

“In our region there is a very good potential for the use of wind energy, so we are interested in the topic of wind power plants, the director of the Murmansk Oblast Energy Efficiency Agency Vadim Glukhikh said. – However, everything is not as simple as it seems at first glance. In our climate, conventional wind turbines do not take root, because they cannot cope with the strong gusty winds typical of the coastal zone.”

Experts explain: a conventional 10 kW wind turbine has a blade span of 10 meters. But even wind turbines with seven-meter blades fall apart in the local wind of 20 m/s speed. Now the experiments are undergoing with wind turbines featuring 5-meter blades. In addition, the operation of such equipment requires professional maintenance, which is very difficult to organise in remote regions. And when wind turbines are installed in villages, where the light used to be only in the daytime, the freshly happy population begins to use their benefits around the clock (at cost of 2 roubles/kWh). As a result of such ‘explosive’ consumption, the installed capacities are not enough.

Naturally, these and many other nuances in the course of the formation and development of the industry will be taken into account, and windmills of the 21st century will place any winds under the command, even the Arctic ones.


One thought on “The Energy Brought By The Wind: The Wind Farm Comes Online In The Leningrad Oblast In 2023”