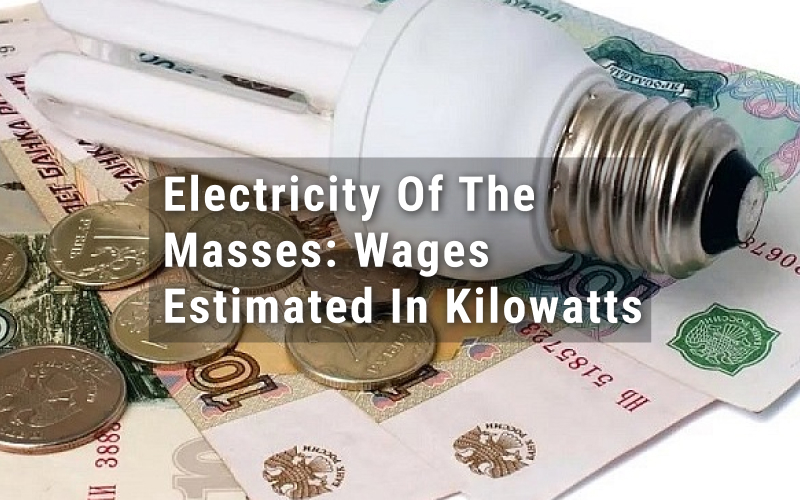 How much is electricity for the people? RIA Rating experts have published the results of the rating on the availability of electricity for residents of 85 regions of Russia. This rating is based on Russian Statistics Agency data. The assessment criterion was the amount of kilowatt hours that Russian residents can buy on their monthly salary in the second half of 2019.

The first place is occupied by the Irkutsk Oblast, where the population benefits from the available electricity due to the abundance of hydroelectric power plants. In July 2019, the cost of one kWh for apartments not equipped with electric-powered cookers, with a minimum consumption of 1.1 roubles, was almost four times lower than the Russian average. The average Irkutsk Oblast resident could have purchased 34436 kWh of electricity with his or her salary. However, the change in the cost of electricity compared to the second half of 2018 is also ahead of the ‘mutant statistics’. This figure was 4.7% (3.5% on average in Russia).

This is followed by the Yamalo-Nenets and Khanty-Mansi Autonomous Districts, where it is possible to purchase 29741 and 21977 kWh respectively. At the same time, the cost of electricity in the two constituent entities of the Russian Federation is 2.87 roubles per kilowatt which is less than the average Russian 4 roubles. Such a prosperity can be explained by a rather high level of salaries in the oil-and-gas regions.

The top five leaders of the rating are the residents of Murmansk and Sakhalin oblasts, who have the opportunity to purchase 18885 and 16470 kWh of their July salaries, respectively.

The middle position is occupied by the Moscow Oblast, whose population can buy 8294 кВт∙ч per month at the price of a kilowatt of 5.56 roubles (38th place), and Yaroslavl Oblast with salaries equivalent to 8156 kWh.

Residents of the Republic of Buryatia with an average monthly salary in July could purchase 8079 kWh. At the same time, the growth of electricity prices in Buryatia for the year was only 2.8%.

Next come the Nizhny Novgorod Oblast, where 8015 kWh can be purchased for July wages, the Lipetsk Oblast (7892 kWh), the Perm Krai (7744 kWh) and the Kurgan Oblast (7569 kWh). It is noteworthy that in the last (the Kurgan Oblast) of these regions the growth of electricity prices was zero compared to the second half of 2018.

Closing the rating is the Pskov Oblast, whose residents can purchase 5578 kWh per month at a price of kilowatts of 4.4 roubles. The Republic of Altai, occupying 82nd place in terms of accessibility of electricity, with salaries corresponding to the price of 5300 kWh, Ivanovo Oblast (5115 kWh), the Republic of Adygea (5079 kWh), and the Republic of Kalmykia, where 4876 kWh can be purchased for the average July salary.

In four out of the five outsider regions, electricity price growth outpaced the Russian average and ranged from 4.3% to 5.2%. But most of all, electricity prices rose in the Republic of Crimea (12.6% at a price of 3 roubles per kilowatt) and in Sevastopol (9.6% at a price of 3.4 roubles per kilowatt). Starting from July 1, 2019, these constituent entities of the Russian Federation set the maximum tariffs at 3.6%, which is higher than the national average of 3.4%. This is due to the government’s policy of gradually increasing tariffs in the youngest regions of the Russian Federation, both to the average Russian level and to the economically sound level.