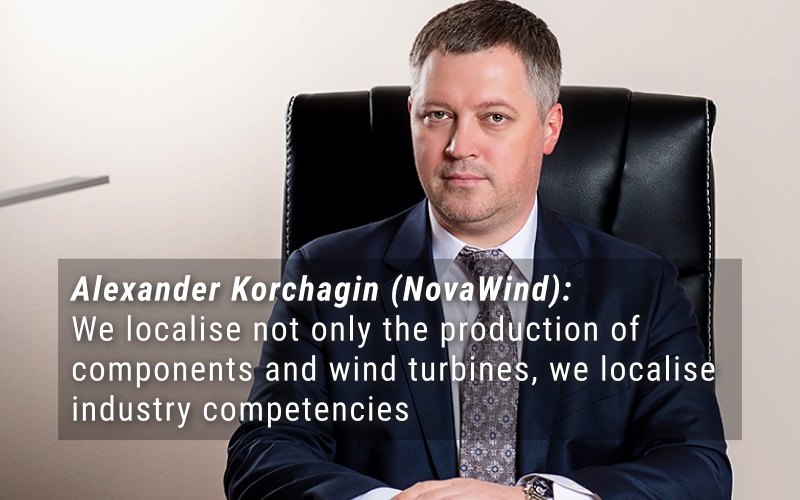 The wind has always been sharing its energy with people: it conscientiously bellied the sails of ships and rotated the wheels of mills. In the 21st century the wind works for power engineering. There has already been built about 600 GW of capacity. Russia also joins the mainstream: Rosatom is setting up the first wind farm in Adygeya. And the forecast of wind power industry development is quite favorable. Details are given in the interview with Alexander Korchagin, Director General of NovaWind.

All wind energy plans and assets of Rosatom are the responsibility of NovaWind, founded in 2017. In just two years, it has gone through several difficult stages: from choosing a technical partner and sites, contracting and liaising with the supply chain to organizing production and construction.

The new division is to create wind farms with a total capacity of 1 GW by 2023. “NovaWind is an equal right shareholder in the joint venture with Dutch Lagerwey. The Red Wind joint venture manages the supply of components, the production of technological units in Volgodonsk and the commissioning of turnkey wind turbines. By the way, at the end of 2017, Enercon, the leader of the German wind industry, whose strategy is aimed at collecting advanced solutions, acquired Lagerwey precisely because of the prospects of Dutch development, which, in turn, confirms the correctness of Rosatom’s technology choice.

In February 2019, the Ministry of Industry and Trade, NovaWind and Red Wind signed a special investment contract for the deployment of industrial production and assembly of key wind turbine components in Volgodonsk on the basis of Atommash. The contract says about 580 sets of high-tech equipment. The volume of NovaWind’s investments in production is estimated at 955 million rubles.

— How many jobs will be created in Volgodonsk and what exactly is it planned to produce there?

— There will be 234 people working in Volgodonsk. The production that we launch this year is initially designed for the current Russian programme. In the future, it will be focused on supplies for projects abroad. The current programme ends in 2023, and we are already working to secure orders beyond this horizon. We are establishing the production for two turbine sizes at once, for 2.5 and 4 MW variants.

Since the start of the project, our approach to localisation has changed dramatically. The first thing we started with was the tower. We began to analyze the logistics of the wind turbine components in the global cooperation: what the leading manufacturers are carrying, which technologies are critical and which components are the most difficult from the point of view of production organisation. As a result, six months later, although the shopfloor has already started to be prepared, we have revised the list of components that we would like to localise in the industry. First of all, we decided to localize the most complicated technical unit, the generator. In addition, there will be a second shopfloor in the same production facility designated for assembling the nacelles. Umatex, a composite holding company of Rosatom, is finalising the project of localisation of blade production and is already supplying us with nacelle covers.

— What about the tower?

— The towers will be produced by Vetrostroydetal in Volgodonsk, too. By the way, many of NovaWind’s partners are not part of Rosatom’s contour. These are private investors who have decided to start a new business.

Our contracting group works with other domestic industrial enterprises, placing orders for projects. Anchor baskets, and this is a very serious large structure with millimeter tolerances; electric power equipment and a number of other components are already being made in Russia. We understand that the maximum number of technologies should be introduced to the country.

NovaWind is not just building wind power plants, but is engaged in the systemic development of a new industry. For one, there are no companies in Russia that would carry out qualified wind monitoring and design wind power plants. NovaWind contractors have to study European experience, analyze European design standards, and translate documentation. At the same time, Russian technical regulation standards are being harmonized, where there was no such object as a wind turbine as a class until recently.

— Why go through so many efforts to catch up with the leaders? I mean, the wind power industry has been developing for more than 20 years, and the market has already formed.

— It’s a non-financial investment for us. We localise not only the production of components and wind turbines, but also localise industry competencies.

Today, there are almost 600 GW of installed wind energy capacity in the world. There is nothing more ambitious in the offing until 2035: only in 2017 alone about $400 billion was invested globally in renewable energy, if I’m not mistaken. The main increase in capacity is due to the wind power plants. It is a mistake to think that this cancels basic generation. In general, everything depends on the scale. If we are talking about wind energy to the extent that it is being implemented in Russia today, it is a drop in the ocean. In Spain, for example, there is 30 GW of installed capacity, and with such economies of scale, you get a power delivered guarantee. Everything depends on the national policy. Our energy system, taking into account industry, technology, and power engineering, with a high demand for thermal energy, of course, requires basic generation. In a balanced energy system, the task is not to cover the energy deficit, but rather to implement the industrial policy strategy. The development of wind energy provides an inflow of new technologies, which can be used in other industries as well.

— Well, let us suppose that you’re gonna be making your components. The globat market still has its leaders. What’s next? Moreover, as you say, the Russian contribution is a drop in the ocean.

— The fact is that along with the consolidation of key players, the business model is undergoing a major transformation. The leading wind turbine manufacturers are active participants in traditional markets, and they are not ready to take all the risks in new markets. This opens up unique opportunities for both energy companies and developers. We can organize the construction of a wind farm ourselves, localisation of production. It would be inappropriate to spend billions of dollars to become one of the top five leaders after a 15-year race in which we did not participate. It is better to consider other models that open up new opportunities.

Our technology partner and us have set up a joint venture where everyone brings their own. Enercon has technologies, and we, in turn, can act as a developer and energy company. In our export programme, we will rely on the countries where Rosatom is presented, where the infrastructure has been created and the state corporation is pursuing an active investment policy, so that we can achieve a synergy.

— And what’s the hardest part about the wind power industry?

— The most difficult thing about the wind power industry is the people with all the competencies I’ve talked about. All new knowledge are all about the people.

Where’d that come from?

Mankind has been looking to get on the wind’s good side since ancient times. Egyptians and Chinese sailed 5,500 years ago. Horizontal windmills are described in the code of the Babylonian king Hammurabi (18th century BC). In Europe, mills, but vertical, began to be built in the 12th century. By the 17th century, when Cervantes sent his Don Quixote to tilt at the windmills in La Mancha, they has already been in use in many countries.

Two centuries later, people thought about using wind power to generate electricity. In 1887, Professor James Blyth built a wind turbine with a 10-meter wheel in the courtyard of his house in Scotland. Blytha has been considered the father of wind power industry ever since. Around the same time, the American engineer Charles F. Brush built what could be called the first controlled wind turbine. In 1891, the Danish scientist Poul la Cour built his own wind turbine, and four years later, a power plant that illuminated the village of Askov and served as a prototype for the miniplants which had spread all over Denmark.

What about Russia? In the 1920s, the Central Aerohydrodynamic Institute developed the first wind turbines for agriculture. Those were able to illuminate up to 200 yards or drive one mill. In 1931, in Kursk, the inventor Ufimtsev built a wind farm, the first in the world with an inertial energy-storage device, by the way. At the same time, a 100 kW wind farm was commissioned in Balaklava. Now it is ridiculously small, but back in the day the station was the biggest in the world in terms of capacity. It had been in service for mere 10 years and was destroyed at the dawn of the Great Patriotic War.

In the post-war years, no one thought about the wind power industry: powerful thermal and hydro power plants were built everywhere, and nuclear power plants emerged. It was only in the early 1990s that the power industry engineers had the wind turbines in mind: several engineering offices began developing the wind turbines. And the design institutes decided on the establishment of five large wind farms, which were to be located in the Leningrad, Vorkuta and Magadan oblasts, as well as in the Crimea and Kalmykia. What happened next, the whole world know: the country wasn’t quite ready for new industries. The works were turned off before they had time to start.

The wind turbines with their smoothly swirling blades are a day-to-day sight in Europe, the USA, China, Australia, but not in this country. In Russia, this tendency is in its infancy.