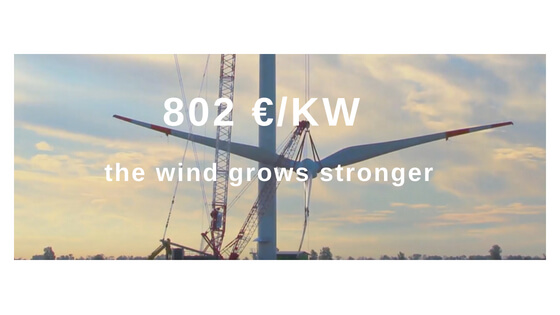 On June 9, the second stage of the renewable energy projects selection in Russia was completed. As previously noted, in the market, serious rivalry in the wind energy sector was expected and these expectations were met. In fact, there was a price revolution in the market, which in future will determine the market’s main development thrust in Russia.

As is well-known, the maximum planned capital expenditure for the 2018 competition was 130,927 rubles per 1 kW of installed capacity. That is, the government, wishing to support the technology development for the construction of wind farms and the wind turbines production in Russia, has provided the opportunity to build wind parks at a price exceeding the average European rates – more than 1,800 euros per 1 kW of power. Considering the 65% localization requirement, the figure in the new market in itself is a serious challenge. But the market already has its own, albeit brief, but ambitious story.

First things first. At the competition, the right to receive support for the construction of wind farms in the amount of about 830 MW was put forward for the auction. The winners of the contest are to commission their wind parks in 2019, 2021, 2023. According to the results of the second stage of this competition, the bids were distributed as follows (1 RUR=74 EUR):

The lowest level of capital expenditures for the construction of a wind farm at the contest was bidden in the amount of 59,339 RUR / kW, which is 802 EURO / kW at the current exchange rate 74 RUR per EUR. This is 226.80 MW, which will have to be commissioned in 2021. And should one actively consider the results table, one will see that the minimum level of costs from 59,339 to 80,305 rubles / kW is declared for a quantity of 823.3 MW, which is almost the whole quantity put forward for the competition. It is possible, with a strong likelihood, to assume that the bids belong to an experienced market player who has great financial resources and an OEM partner who has provided such a low price for the supply of turbines. And this partner should already have a wind turbine localized in Russia by next year. In the next few days, the official results of the Capacity Competitive Selection – 2018 (Russian: Конкурсный отбор мощности, КОМ-2018)  will be announced and we will learn the list of the winners. One thing is certain, the Russian wind energy market will not be the same as it was before; the wind power in Russia has become a strong rival to the traditional and nuclear generation. The world has changed.