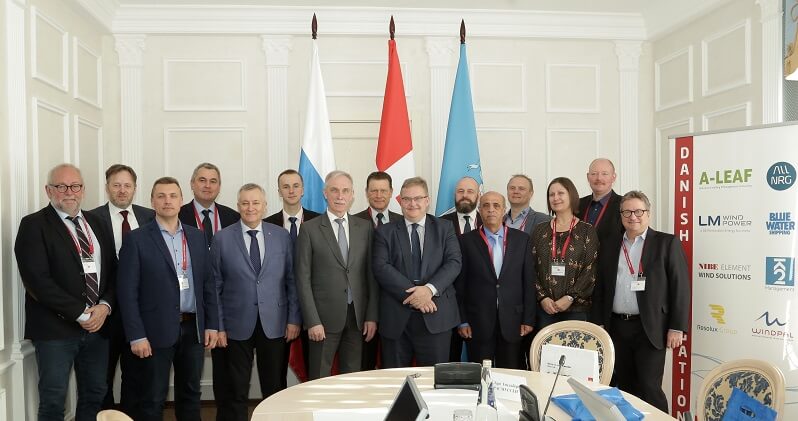 Following the signing of the contract to locate the production of wind turbine blades concluded between the Ulyanovsk region and the Danish company “Vestas”, (RAWI member) other companies became interested in the region last year. Ulyanovsk was visited by a large business delegation of Danish manufacturers, who held a business meeting with Sergei Morozov, the governor of the Ulyanovsk region at the 11 of April.

Looking back, the plant of the company “Vestas” should be put into operation in the Ulyanovsk region in 2019; the cost of this project is more than one billion rubles, and the overall production is planned to be up to 300 blades per year. The Danish investor will localize production at the level of 70% and will deal with the overseas sales of the blades. Kazakhstan and the countries of Central Asia is one of the planned export destinations. As noted by Sergei Morozov, in the future, the Ulyanovsk region plans to form a number of wind turbine components suppliers united around “Vestas”, and local Ulyanovsk companies would join this chain.

“We are extremely interested in the ‘green’ energy development. The wind farm of 35 MW is just the first step to this. In the future, we intend to generate at least 1 GW of electricity derived from the wind. Investors will receive privileges that have no analogues in Russia, so we expect to create a large number of “Vestas” suppliers,” said the governor.

The project of the Ulyanovsk park of renewable energy sources is being implemented by the Finnish corporation “Fortum” (RAWI member) (which invested 65 million euros in it) and the Russian company Rusnano. The Ulyanovsk region acted as a pioneer in the development of this kind of industry. According to Igor Bryzgunov, Chairman of the Russian Association of Wind Industry (RAWI), the Ulyanovsk Region has prospects to become the birthplace of a wind power industry, new for Russia.

“The region looks ahead and understands that it is impossible without localization to further develop and create the wind power industry. Today, a strong foundation has been laid in the production of blades. If this project takes a place in the market, it will hold it for a long time. The blades are the most important of the wind turbines parts, and this production will surely ring up the production of the remaining components” Mr. Bryzgunov said.

The Chairman of the RAWI stressed that the Ulyanovsk Region provides immense support to localizers, which is an appealing factor for investors. Igor Bryzgunov also suggested the advent of other market members, in addition to “Fortum”, involved in the construction of wind parks, namely the Russian Rosatom and the Italian Enel. It should be noted that the goals, set by the Ulyanovsk Region for generating 1 GW of wind power at the wind farms, make up one-third of the Russian market.

Thomas Winkler, Danish Ambassador to Russia, noted the high interest of Danish companies in the Ulyanovsk region. In addition to the wind power industry, the ambassador said, the Scandinavians are considering cooperation in the medicine and agriculture.

“There is a very productive cooperation between us. I hope that this visit will strengthen it. I am confident that today we will hold negotiations on the placement of new productions. We look forward to cooperation in the pharmaceutical, agricultural and mariculture sectors” Thomas Winkler said.