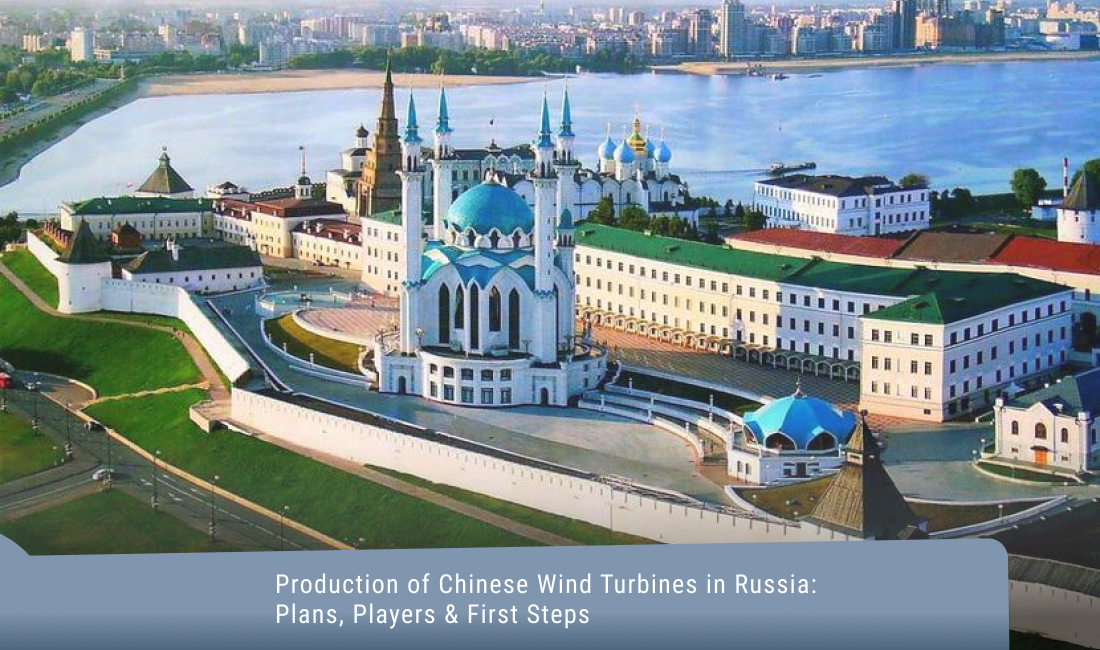 In Russia, more specifically in the Republic of Tatarstan, there are plans to localise the production of wind turbines from China. The project participants include members of the Russian Association of Wind Power Industry.

Companies from Russia and China interested in cooperation have set up a consortium called Architects of the Urals’ Wind, which together with Tatneft will explore the possibility of establishing licensed production of wind power equipment in Tatarstan.

A roadmap involving the establishment of the production of wind turbine kits and the construction of wind power plants was signed during the Tatarstan Energy Forum in late April 2022 between Tatneft PJSC and Rekoinvest Chelyabinsk, representing the consortium. The equipment and technology to be used in this project belong to China’s Harbin Electric Corporation WindPower (HEWP). According to Dmitry Ivanov, Deputy General Director for Development of Rekoinvest, the signing of the document allows the parties to study and assess the financial model of Tatneft’s entry into the project for localisation of HEWP equipment.

The consortium Architects of the Urals’ Wind, which was established just two months ago, includes more than 10 companies from China and the Russian Federation. Most of them have experience in implementing large wind energy projects. Among the most prominent players in the Russian renewables market who took part in the consortium is VEB Engineering, a subsidiary of Vnesheconombank. The consortium also included: China’s HEWP (supply, installation and commissioning of wind turbines) and its Russian representative – Energoprominzhiniring LLC, Agis Inzhiniring LLC (construction of wind metering complexes and wind turbine towers), NEPDI Energoinzhiniring LLC (a subsidiary of NEPDI Design Institute, is a subsidiary of China Power Engineering Consulting Group), Alternative Energy Scientific and Technical Centre LLC (manufacturing of wind measuring complexes, turnkey supply of wind power plants), Chelyabinsk engineering company Evroservis LLC, transport company KhA-KEN Group LLC, AvtoTrans-Sibir LLC (installation of wind power plants) – (a member of the RAWI).

Dmitry Ivanov explained that in the near future the consortium intends to analyse Tatarstan’s wind energy potential and determine the optimal parameters for the wind turbines needed for the joint project. The consortium members will then propose options for transferring HEWP technology for the production of the relevant components. The outcome of this work should be the launch of production of HEWP components in Tatarstan with maximum utilisation of TATNEFT enterprises. Monitoring of TATNEFT enterprises capable of producing components according to the drawings of the manufacturing plants is already underway.

The flagship of the consortium, the Russian-Chinese company Rekoinvest, is now ready to offer the project participants not only investment consulting and technology transfer services, but also the creation of its own foundry, which would allow to set up production of large-sized parts for wind turbines in the Urals: hubs and nacelle bodies. The concept of the plant and the production model have been developed, right down to the calculation of the production cost of the parts. The plant, which is designed for production of 50 wind turbines per year, may very well start manufacturing in 2 years. Approximate investments will amount to RUB 2 billion.

According to the participants of the consortium Architects of the Urals’ Wind, the project, developed jointly with Tatneft, can be subsequently scaled to neighbouring regions, involving new production facilities and companies. In addition, the consortium is considering participating in wind power projects in the near abroad; talks are under way with Uzbekistan, Kyrgyzstan and other neighbouring countries’ governments.

The scale and prospects for production of the originally Chinese wind turbines in Russia as well as construction of new wind farms involve many participants of the Russian wind energy market in the project. As of today, it is known that members of the RAWI Rosizolit and Barrus. Project Logistics have already joined the Architects of the Urals’ Wind consortium.