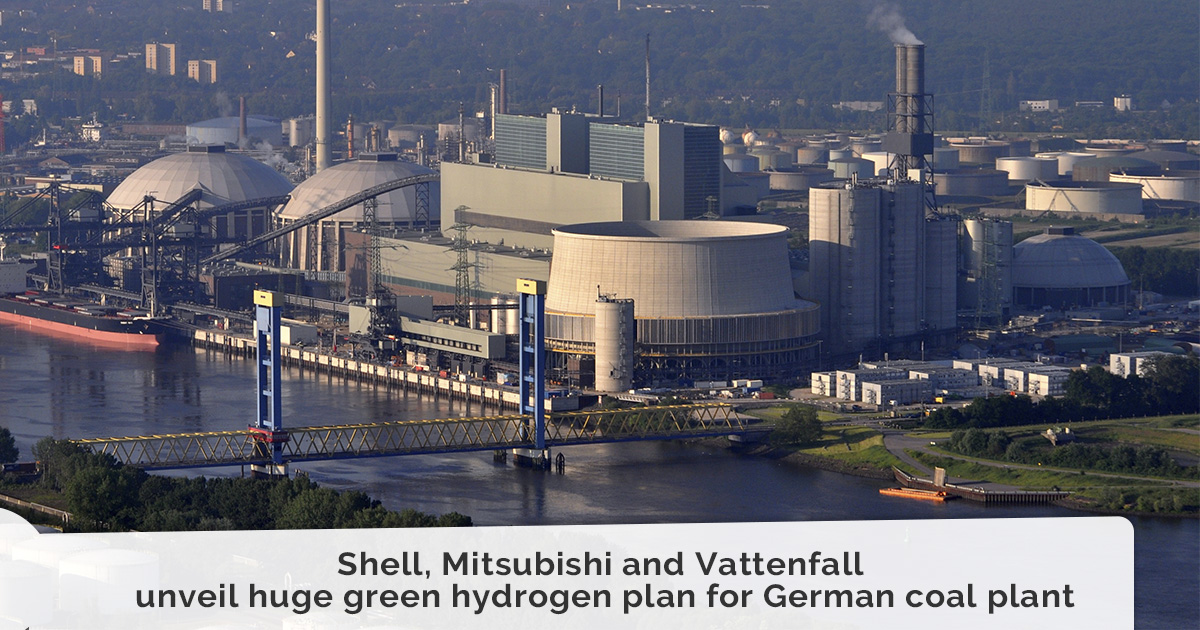 The companies have signed a letter of intent to explore the construction of a scalable electrolyser with an initial output of 100MW, which later is slated to develop into a so-called ‘green energy hub’ at the site of the former giant coal power plant in Hamburg’s Moorburg district, near to Europe’s second-largest harbour.

Vattenfall has shuttered the 1.6GW plant in December 2020 after winning in a German hard coal phase-out auction in the same month, which is part of the country’s coal and lignite phase out by 2035-38. The plant was operational little more than five years.

“The production of fossil free hydrogen is one key to the decarbonisation of the industry and the transport sectors,” said Andreas Regnell, senior vice president and head of strategic development at Vattenfall.

“In this project we can contribute with our expertise and experience at the unique Moorburg site that has the infrastructure that is necessary for large scale production of hydrogen.”

Next to studying to which extend existing infrastructure can also be used for the production of energy from renewables, the companies will explore concepts for the necessary logistics chains and storage options for hydrogen.

Subject to investment decisions, the production of green hydrogen at Moorburg could start in 2025, turning the former coal site into one of Europe’s largest electrolyser plants.

Vattenfall is increasingly betting on hydrogen produced via electrolysers from non-fossil sources for various kinds of uses, ranging from steelmaking to biofuel production. The utility earlier this week announced a plan for a 200-500MW electrolyser attached to a refinery in Sweden.

The consortium hasn’t yet determined exactly how the green hydrogen to be produced in Hamburg will be used. Vattenfall said numerous potential customers for green hydrogen are located near the site, enabling the project to cover the entire hydrogen value chain – from generation to storage, transport and utilisation in various sectors.

“There is no better location in Hamburg for a scalable electrolyser of this size,” said Wärme Hamburg chairman Jens Kerstan, who is also the city state’s environment and energy minister.

“Via the 380 kilovolt connection and the connection to Brunsbüttel, we have direct access to the supply of green electricity from wind power – and thus the possibility of actually producing green hydrogen in relevant quantities.”

In addition, overseas ships can call at the location directly and use the quay and port facilities as an import terminal, and the municipal gas grid company also plans to expand a hydrogen network in the port within ten years.

The partners intend to apply for funding under the EU’s ‘Important Projects of Common European Interest’ (IPCEI) programme.

Before Vattenfall had built the Moorburg coal plant, a gas power plant was operating at the site.