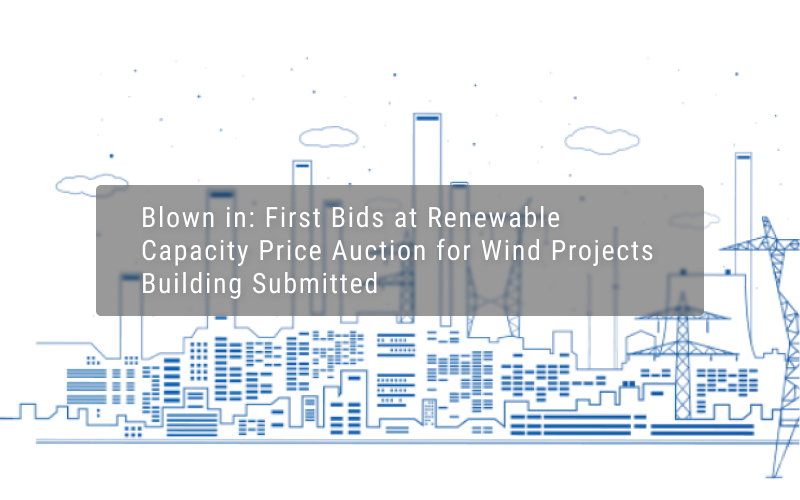 The first bids for the competitive capacity auction of investment projects for the construction of renewable energy generation facilities for 2021-2024 appeared at the Russian trading system administrator (ATS JSC) website. The competition is scheduled to be running from November 17 to December 1, 2020.

As of November 23, 2020, two wind energy investors announced their intention to build wind farms (35 MW and 33.6 MW respectively) with a planned launch in 2023 with only 36.64 MW being put up for auction for 2023. The planned capital expenditure is 145,477 roubles per 1 kW of installed capacity for the wind farms would-be awarded.

For wind projects planned to come online in 2024, 9 bids were placed for a cumulative capacity of 352.5 MW. The investors plan building facilities with a capacities ranging from 20.5 MW to 54.6 MW. According to the terms of the auction, it is possible to individually bid for no more than 143.45 MW. The planned capital expenditure is 113,318 roubles per 1 kW of installed capacity for the 9 bids.

It should be reminded that investors planning to build solely wind farms and small hydroelectric power plants can take part in the auction with solar projects being excluded.

The most recent competitive capacity auction was held in 2019, and due to the large volumes awarded in previous years, only 75 MW were auctioned off. PJSC Enel Russia won the wind projects section. The company is to build the 71,25 Rodnikovskaya wind farm in the Stavropol Krai with a planned capital expenditure of 64.87 thousand roubles per 1 kW. According to the auction results, the Enel Russia’s portfolio reached 362 MW.

According to Igor Bryzgunov, Chairman of the Board of the Russian Association of Wind Power Industry (RAWI), this year the ‘bottom of barrel’ of the first renewable energy support programme in Russia are being auctioned off. In terms of wind power, the struggle for market volumes has grown very competitive since 2015.

He says, “Three OEMs, consistently increasing the local content level in their wind turbine components, provided three of the investors secured a foothold in the market with the most advanced wind turbines. And peculiarities of the public support, where the interests of the investor are linked to the interests of the OEM, ensured the creation of a new industry in an unprecedentedly short time.”

He notes there was much talk that the new industry – the manufacture of multi-megawatt wind turbines – ensures the development of new technologies, creates jobs, and produces the country’s image. But the prospects of ‘being burdened with enhanced commitments’ in the potential iteration of the gorvernment support are driving out one of the wind turbine manufacturers from the market.

The commentator is convinced that “From 2024 on, we could see only two manufacturers left in our market, Vestas and NovaWind (Enercon-Lagerwey), which means the sharpening of competition on top of everything else. But not the kind of competition that develops the market when the number of equipment manufacturers grows and the price for electricity decreases, but the one that can lead to increased tension in the market due to the simultaneous narrowing of opportunities for an investor.”

Since 2013, when the renewable energy support programme was first launched, only three OEMs have entered the Russian market.

Igor Bryzgunov then sums up, “In the continent-size country and possessing the highest potential for wind energy development, [we have] only three, and one of them is withdrawing from the market. I’m afraid the country is only pretending to support latest technologies in the energy sector while being barely out of ‘fossil fuel diapers.’

To date, 641 MW of wind farms have been built and commissioned in Russia with several more hundred megawatts under construction. By 2024, it is planned to build more than 3380 MW. You can find more details about the market situation in the Review of the Russian wind energy market for 2019.