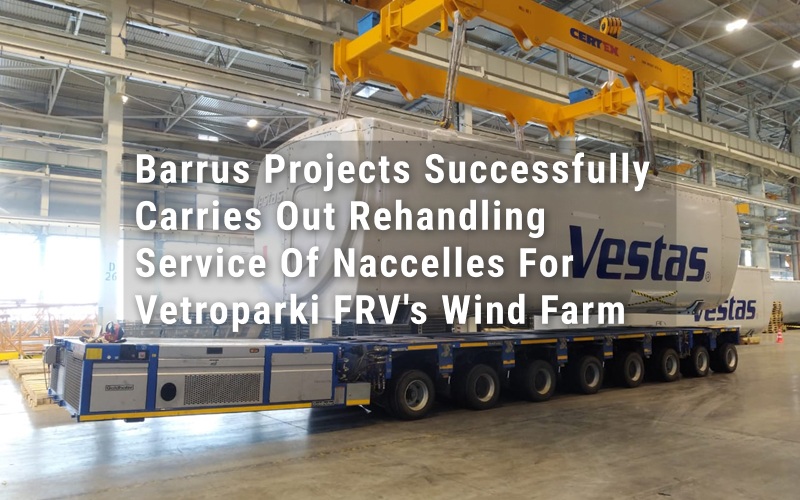 Barrus Projects (RAWI member) has successfully carried out a complex of works on interfactory transport of wind turbine nacelles at the territory of the Liebherr manufacturing plant with further transportation of the wind turbine nacelles from the plant to the loading berth for the construction of the Kamensko-Krasnosulinskaya wind power plant and the Gukovo wind power plant.

The Vestas nacelle at the Liebherr plant site has the following dimensions and weights: 12 x 4 x 3m / 72 tons.

Further on, within the framework of the project on construction of the Kamensko-Krasnosulinskaya WPP and the Gukovo WPP near the cities Kamensk-Shakhtinsky and Gukovo respectively, Rostov Oblast, Russia – by the Vetroparki FRV and Vestas companies – Barrus. Proyektnaya Logistika, LLC has carried out a set of works for the needs of Vestas on transportation of the wind turbine nacelles (54 units and 24 more by September) from the manufacturer (Liebherr-Nizhny Novgorod, LLC) in Dzerzhinsk to the specialized berth for loading oversize and overweight cargoes into Dzerzhinsk with subsequent loading on river transport.

All the works were carried out by the Barrus. Proyektnaya Logistika, LLC with the company’s own rolling stock, namely Goldhofer PST/SL with power pack units (PPU), specialized Mercedes-Benz ballast prime movers, as well as highly qualified operators were put on the job.

The team of Barrus. Proyektnaya Logistika, LLC continues its energetic efforts in the rapidly developing wind power industry of the Russian Federation.