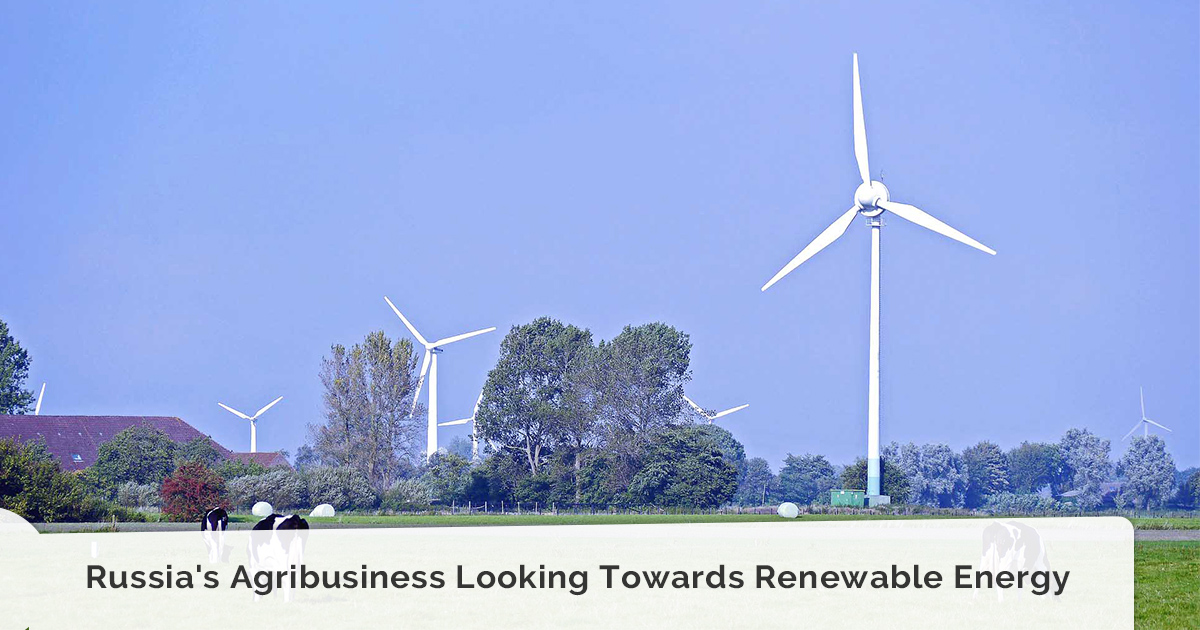 The conventional power industry is no longer able to cope with the agro-industrial sector’s growing demand for electricity. This was the conclusion reached by the participants of the Decentralised Power Supply to Russian Agro-Industrial Enterprises conference held within the AGROS 2021 International Exhibition. The event was organised by three industry associations, the Russian Distributed Power Generation Association, the Photovoltaic Industry Association and the Russian Association of Wind Power Industry.

One of the main features of the Russian agricultural sector is its significant heat and cold consumption and the forced necessity to purchase power at high retail market rates. In addition, due to enterprises being remote from communities, they often face difficulties in obtaining required amount of power and securing connection to the grid.

In this context, distributed power generation can be a solution and is already seen as one of the most effective tools for reducing energy costs. According to Maxim Zagornov, president of the Distributed Power Generation Association, agricultural production is becoming increasingly power-intensive. “This requires a constant increase in the level of energy supply. It is obvious that the conventional power sector isn’t keeping up with these tasks. Agrarians are increasingly focusing on alternative means and sources of power and heat generation,” he said during the discussion.

According to Dmitry Stepanov, Deputy General Director of Altren LLC (a member of the RAWI), the the agricultural sector’s interest in renewable energy is fully understandable. “For instance, the tariff for farms in the Ulyanovsk Oblast is about RUB 8 per kWh, and the use of renewables makes it possible to shield from tariff increases. Unfortunately, there is still a certain distrust towards new forms of generation, but every year more and more people begin to realise that it is not enough to think just for one or two years ahead, but for 10-15 years. That’s why, interest in renewable energy among the distributed generation sector will continue to grow,” he believes.

One of the promising areas is solar- and wind-energy-based generation. According to Dmitry Stepanov’s estimates, it is already possible to achieve the wind farms’ kilowatt-hour rate starting from RUB 3. “To achieve such figures, it is necessary to reach out to professionals who don’t just help you choose the right equipment, but also make calculations on its optimal efficiency, predict power output and carry out connection followed by service maintenance,” he encouraged.

The interest in wind energy among agribusiness enterprises is additionally evidenced by the interest in the one of RAWI members’ booth, the VDM-Tekhnika LLC, at AGROS 2021. The company, which is a resident of the Skolkovo Innovation Centre, presented its own development of small wind turbines. The wind turbines are designed to operate both separately and as part of a hybrid power supply system for a range of consumers (communication facilities, military installations, households, etc.).

The agribusiness’ sustained interest in having its own generation is also ensured by the possibility of using various fuels, e.g. biogas. German Teplovodsky, head of the MWM Austria GmbH Russian representative office, emphasises that the modern agricultural sector has a huge ‘in-house’ energy resource – its production waste. “With the help of cogeneration technologies the waste can be used to cover 100% of the power and heat demand of an agricultural facility,” he said. German Teplovodsky pointed the biogas plant Luchki in the Belgorod Oblast as an example, which uses poultry and pig farming waste as fuel. It is the largest facility of its kind in Russia, with a capacity of 3.6 MW. The plant processes up to 200 tonne of organic waste a day from agricultural enterprises in the region. The power generated by the plant is enough to meet the demand of the entire Prokhorovsky district of Belgorod Oblast.

For his part, Sergey Arefyev, a representative of the Kovrovskie Kotly (Kovrov Boilers) plant, added that crop waste also has some fuel value. Apple must, wheat or buckwheat husk, sunflower hulls, hop and grape vines can be used as fuel. “As the available biomass resource potential in Russia is almost inexhaustible, the development of bioenergy is an extremely important task in order to reduce the energy dependence of agricultural production,” said Sergey Arefiev.

According to Andrei Shepelyaev, director of Kompaniya Disel LLC, the number of biofuel types is increasing year by year. In particular, as he said, in 2020, a new biofuel produced from miscanthus (commonly known as Elephant Grass), a weed plant similar to rapeseed, was patented. According to Andrei Shepelyaev, already this summer the Yaroslavl-based company will start testing the operation of a power generating unit using this plant fuel. According to forecasts, it will be three times cheaper than diesel fuel, and at the same time more eco-friendly.

Alexander Grechishnikov of Sovtest ATE engineering company spoke about the possibilities of hydrogen application in the sector. “One of the biomass processing-derived products is bio-hydrogen produced from biogas. It can be used both to provide electricity to remote farms and for agricultural machinery. Indicatively, an H2 Dual Power tractor (a renewed rendition of New Holland T5.140) went on sale in the Netherlands in 2020. Its engine is powered by a mixture of diesel fuel and 65% hydrogen. The hydrogen comes from the five steel hydrogen tanks stored in an enormous construction on top of the cab that hold around 470kg of hydrogen gas,” said Alexander Grechishnikov.

A representative of the farming business community, Anvar Zufarov, head of the Bebeshkino agricultural enterprise, is convinced that it is advisable to introduce energy technologies in the agricultural sector as an integrated concept: solar and wind energy- and biofuel-based power generation. “The Bebeshkino farm, which specialises in the production goat- and cow-milk cheeses, is located in the Pskov Oblast, a region featuring one of the lowest average numbers of sunny days per year. So relying purely and solely on solar energy is rather risky. That is why it is more effective to introduce the whole range of sustainable energy technologies available at our farms,” Anvar Zufarov believes. In addition, the agriculturer raised one of the main problems in the energy supply of agribusinesses. “Major generating companies take no interest in supplying small capacity facilities. And small farms cannot afford large generation facilities. We might be ‘small’, but we are many. And we need affordable energy,” Anvar Zufarov summed up the discussion.