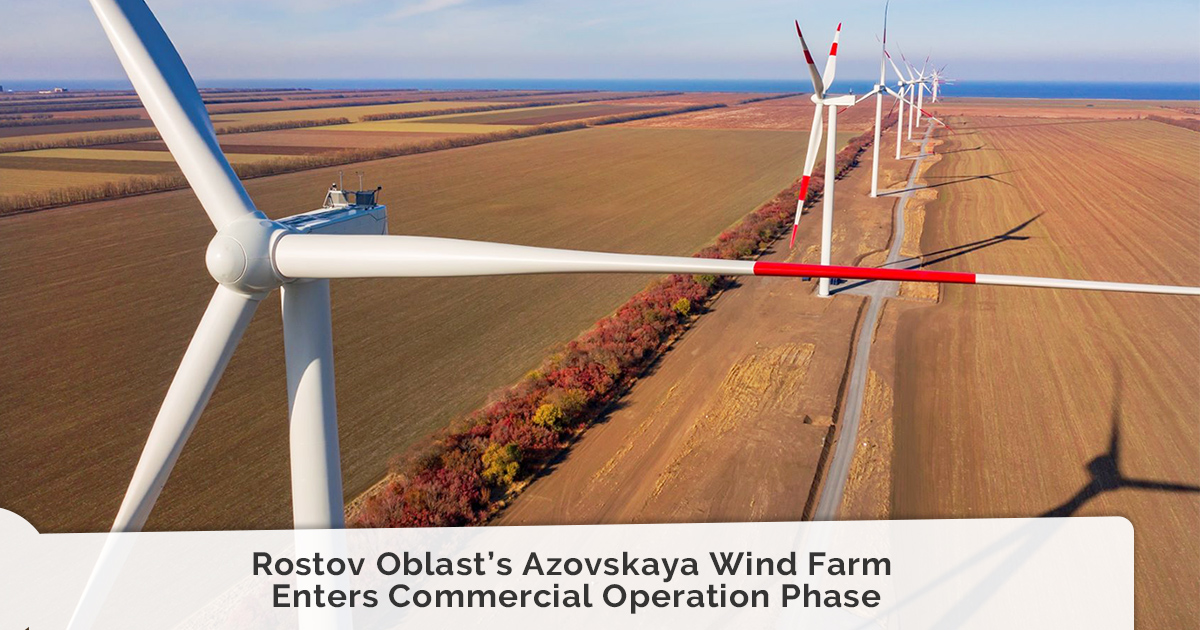 The wind farm was scheduled to start up in 2020, but the COVID-19 pandemic took some adjustments of its own. Nevertheless, it was possible to minimise deviations from the work schedule and in May, 2021 the plant became a full-fledged player in Russia’s wholesale market for electricity and power (WMEP).

The Azovskaya wind project is the first project of the PJSC Enel Russia, a Russian subsidiary of the Italy-based Enel Group, and the fifth wind power generation facility in the Rostov Oblast. The wind farm is a participant of the region’s ‘Governor’s Hundred’ programme supporting priority large-scale projects. The Italian investor’s funds allocated for the construction and commissioning amounted to 132 million euro.

Earlier, General Director of the Investment development Agency of the Rostov Oblast Igor Burakov named Enel Group as one of the region’s pioneers of sustainable power industry, and the Azovskaya project as the company’s largest project in this field in the Russian South.

With the installed capacity of 90 MW, the wind farm will be able to generate about 320 GWh per year avoiding the emission of about 260,000 tonne of carbon dioxide into the atmosphere.

As Stephane Maurice Zweguintzow, General Director of Enel Russia, previously noted in a media interview, the commissioning of the wind farm is an important step for the company on its way to transforming its business towards a lower carbon footprint.

Enel Green Power, a division of Enel Group that oversees the development and operation of renewable energy facilities globally, was responsible for the construction of the project. In addition to the Azovskaya wind farm, the company is implementing two other wind power generation projects in Russia, the 201 MW Kolskaya in the Murmansk Oblast and the 71 MW Rodnikovskaya in the Stavropol Krai.

According to data posted on the Enel Group website, the company’s total investment in the three wind farms in question is estimated at 495 million euro. “This underlines Enel Russia’s clear commitment to contribute to the UN Sustainable Development Goals, including SDG 12 – Responsible Consumption and Production and SDG 13 – Combating Climate Change,” the company said in a statement.