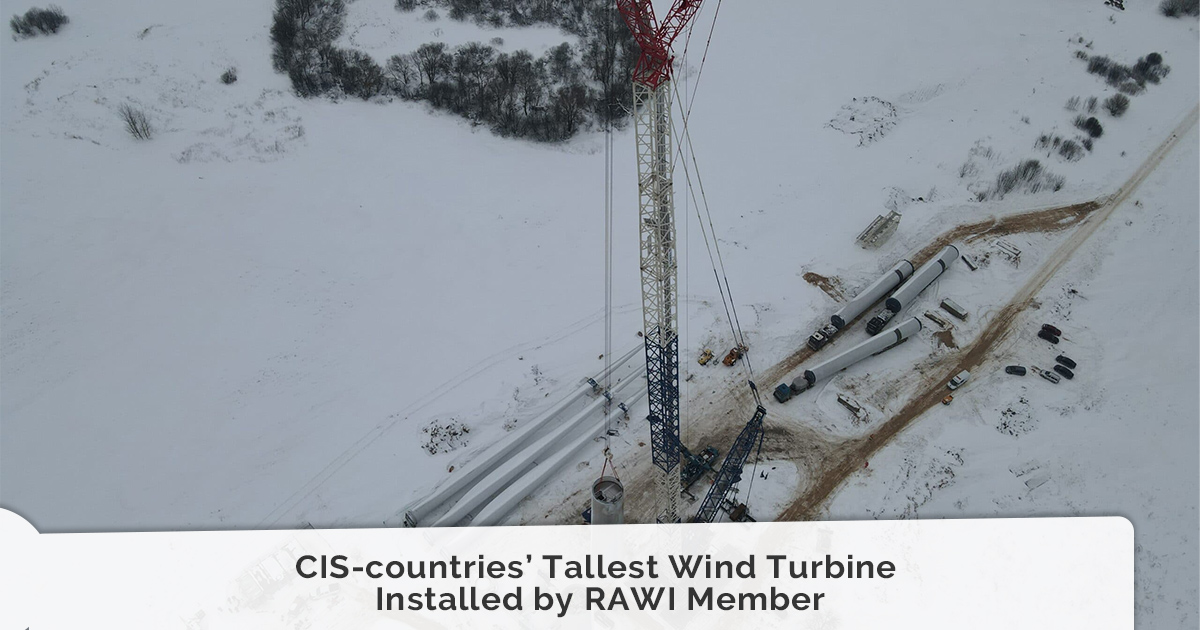 Wind power is one of the fastest-growing global industries that utilises cranes for material handling and installation works.

In the fight to preserve the environment and to increase power generation volumes, wind turbine
manufacturers are constantly improving their equipment from day to day. Newly erected wind turbines get taller and more powerful with their towers reaching 180+ metres and generator outputs beyond 10 MW.

Sarens Group (a member of the RAWI), through its Belarussian subsidiary, which is one of the largest companies in the market of lifting equipment in the country, is proud of its participation in the construction of the highest wind turbine operating in the CIS-countries.

In February-March 2021, a new CIS record-breaking wind turbine V136 by Vestas (a member of the RAWI) featuring a 142-metre-high tower was built near the village of Asmolovichi, Mstsislaw district, Mahilyow Voblasts. The tower consists of 6 sections, individually weighing 58-83 tonne and being 12-33 metre long. The size of the blades is also impressive with each of them being 67 metres long.

A Terex-Demag SL3800 650-tonne lattice boom crawler crane featuring a 159-metre-long boom, as well as an auxiliary Grove GMK5130-2 130-tonne crane were provided by Sarens Bel for the installation of this giant of a wind turbine. A 130-tonne and 200-tonne cranes hire was originally planned for unloading parts of the wind turbine, but due to a delay in delivery dates, it was decided to unload all elements of the wind turbine with the mainstay machinery.

The work was carried out in two stages. For the first heaviest five tower sections, the crane was assembled with a boom length of 123 metres. Then, to install the remaining tower sections, the nacelle, the gearbox, the rotor and the blades, the boom length was extended to 159 metres. The tricky installation of the wind turbine was made hardcore by the challenging weather conditions with frosts as low as -30 °C, severe snowstorms and blizzards, which Belarus has not seen for the past two decades.

In spite of the numerous obstacles encountered during the project execution, the Sarens Bel’s cranes fulfilled all the tasks set. Today, the company’s specialists are ready to take part in the installation of new, even taller and more powerful wind turbines, both in the CIS and in other regions.