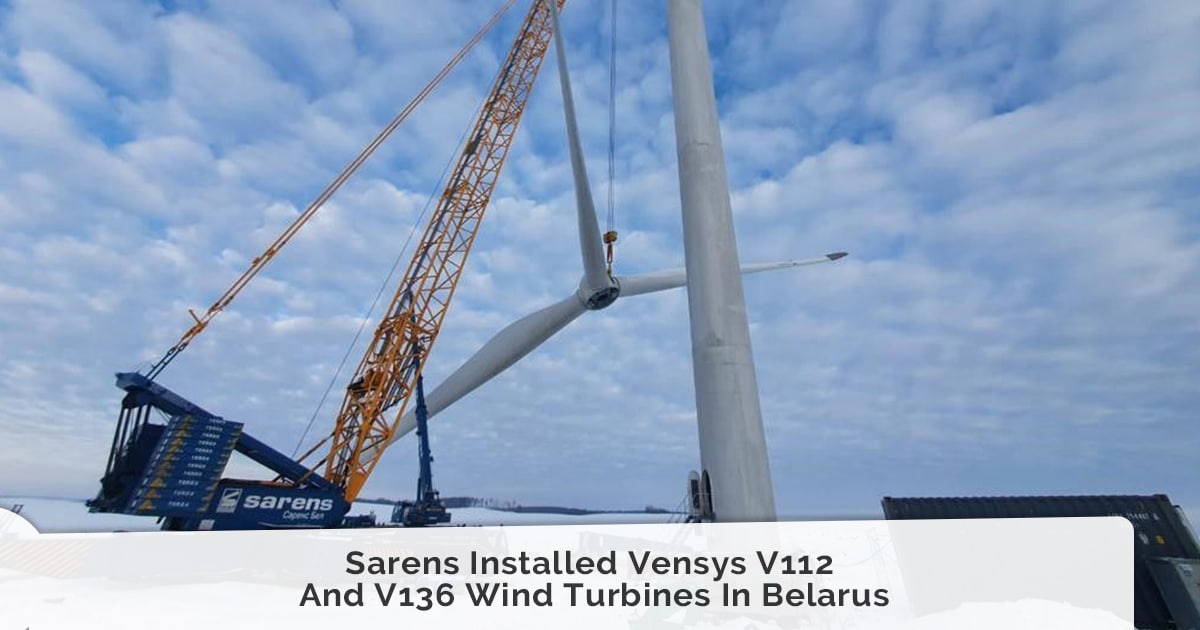 In late 2020, Sarens (a member of the RAWI) was selected as the crane supplier to carry out loading and unloading of wind turbine parts and its main installation. Hub height of the winRAd turbine (2.5 MW Vensys 112) is 93.5 metres and it is now located near the agricultural town of Luki, Karelichy District, Grodno Region, Belarus. Back in 2019, the company already installed a similar wind turbine in the Republic.

Grove GMK6300L all-terrain truck-mounted crane with a maximum lift capacity of 300 tonnes, and Terex-Demag AC100-4L (100 tonnes) cranes were chosen by Sarens for the loading and unloading work. The TEREX DEMAG TC2800-1 with a truss-type boom (the main boom is 126 metres long and it also has a LF2 gooseneck extension (fly jib) with a length of 12 m, a main counterwieght of 160 tonnes and a superlift counterweight of 130 tonnes) and Terex-Demag AC100-4L (100t) were chosen for the main installation work.

The beginning of loading and unloading works was planned for the beginning of February with the main installation work being scheduled to start on February 8, but because of the changes on the building site (the assembly of the main crane arm had to be done, blocking the way via the wind turbine parts were being transported) and the weather conditions in Belarus (heavy snowfalls and frosts up to -25 degrees Celsius) it was decided to mobilise earlier, and to unload some elements of the wind turbine using cranes first intended to carry the main installation work.

As a result, the 600-tonne crane was assembled and ready to work on 5 February.

The wind turbine consists of 5 tower sections with a maximum weight of 63 tonnes; the generator weighing 58 tonnes, and the rotor assembly with blades weighing 76 tonnes.

The work was successfully carried out under difficult weather conditions including several days of idle time due to extreme wind, difficult transport accessibility due to snowfall and smart frost, which made it difficult to deliver the wind turbine components.

Sarens Bel (a subsidiary of the Sarens Group) has perhaps the most extensive experience in full support of renewable energy projects in the Belarusian market ranging from loading and unloading to the provision of cranes for wind turbines installation and further maintenance.