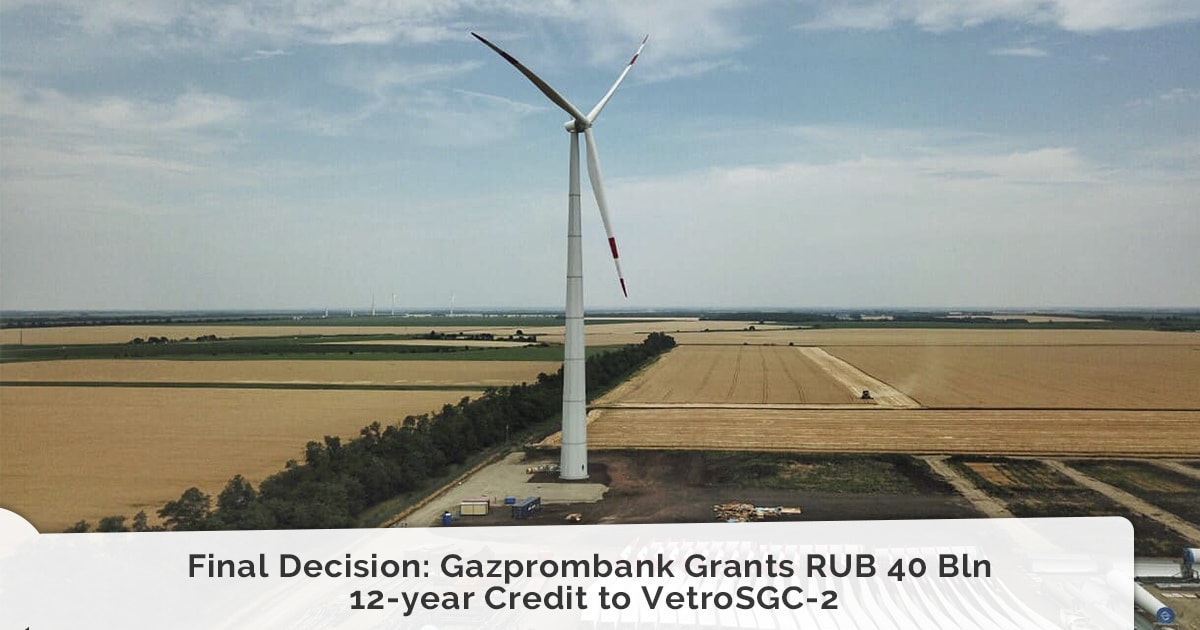 Gazprombank and VetroOGK-2 (part of Rosatom) announced the final closure of a package transaction to provide bank financing for wind farm projects in Russia with a total installed capacity of 340 MW. The last of the wind farms is scheduled to be commissioned in December 2022.

Under the transaction, Gazprombank will provide VetroSGC-2 with financing worth RUB 40 billion for a term of 12 years. Gazprombank also became a 49.5% shareholder in the equity of the project company VetroOGK-2. The controlling interest in VetroOGK-2 remains in the ownership of ROSATOM’s organisations.

Since 2017, the bank has been financing the Rosatom’s first project to build 660 MW of clean capacity, 360 MW of which have already been commissioned, with the remaining 300 MW scheduled to reach the operational stage by late 2021.

Alexei Belous, Deputy Chairman of Gazprombank’s Management Board, says, “The existence of successful stories in the VetroSGC’s project execution made it possible to organise the financing the VetroOGK-2’s project in the shortest possible time, as well as to optimise the level of support from the project initiators. Together with the VetroOGK project already under way, the total volume of Rosatom’s green capacity financed by the Bank has reached 1 GW worth over RUB 100 billion.”

For his part, First Deputy Director General for Corporate Development and International Business of ROSATOM Kirill Komarov comments, “The commitment to sustainable development is in line with global trends and is captured in Rosatom’s strategy. We strive to maximise the green energy share, consistent with the goals of sustainable development, in our portfolio. We certainly consider both wind power generation and nuclear power to be such ‘green’ activities – due to the minimal greenhouse gas emissions. The deal with Gazprombank is a great experience for us and a confirmation of our strategic approaches to doing business.”

Alexander Korchagin, Director General of the Rosatom’s subsidiary NovaWind, says, “As part of wind projects execution, Rosatom has developed a full range of competencies in the new industry, from the establishment of its own production of wind turbines and an efficient supply chain with the participation of the State Corporation’s enterprises to the construction of wind farms, commissioning, subsequent operation and maintenance of wind power plants. Two of Rosatom’s largest wind farms already supply power to the Russian national grid. Four more wind farms will be commissioned this year. We plan to further increase our order book in Russia, as well as to enter international markets as a renewable energy projects developer created with Russian equipment.”