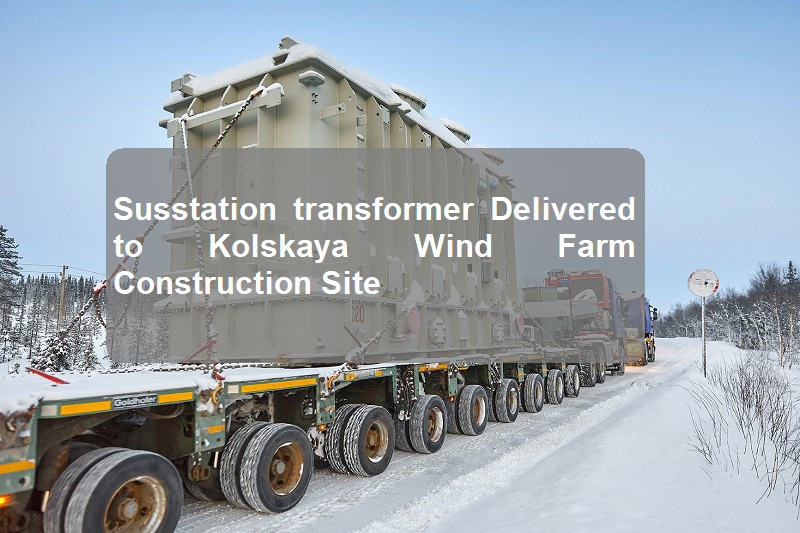 A substation transformer was delivered to the construction site of the Enel Russia’s Kolskaya wind farm, Murmansk Oblast. For this, a special project was developed, providing for the use of a dismountable structural steel flying bridge.

First, the transformer, weighing more than 122 tons, more than 7 meters long, more than 4 meters high and almost 3 meters wide, then it was delivered by rail to the Kola train station, where it was moved to a purpose-built low-loading trailer, which allows to transport cargo securing it at safe height from the ground to pass obstacles.

The transportation of the transformer from the railway station to the construction site of the Kolskaya project was carried out along the only possible route, the bridge over the Kanent’yavr river. A 30m dismountable structural steel flying bridge was erected over the existing bridge.

Stephane Maurice Zweguintzow, General Director of PJSC Enel Russia, says, “The delivery of the transformer for the substation is an important step in the construction of the wind farm. To transport this large-sized cargo, a new itinerary was elaborated and a unique technical solution was successfully implemented, the construction of a flying bridge capable of withstanding increased loads. Despite difficult weather conditions, work at the construction site of the Kolskaya wind farm is carried out on around-the-clock basis. The construction of the wind power plant in the region is one of our strategic objectives, which will also make it possible to diversify the region’s energy portfolio.”

On the night of the transportation, traffic on the road segment was completely blocked for about 6 hours. During this time, contractor personnel, under the leadership of Enel Green Power, have installed a temporary bridge, transported the cargo and dismantled the structure.

The total weight of the vehicle, including the tractor, purpose-built trailer and the transformer itself was more than 175 tons. The transportation was carried out in the difficult conditions of the northern winter at subzero temperatures of 25-30 degrees C.

At the same time, at the Kolskaya project site, work continues on the installation of wind turbine foundations, work is underway to build permanent on-site roads, and boulder blasting operations are also continuing. Some structural elements and building materials for the wind farm were already delivered to Russia.

In addition, work is underway on the construction of a transmission line that will connect the wind farm to the Russian national energy grid, the installation of a medium voltage cabling 1 and collector network and finishing the concreting and installation of steel structures of the substation main building, for which the transformer was originally delivered.

The construction of the 201 MW Kolskaya wind farm, the largest renewable energy project beyond the Arctic Circle, began on September 19, 2019.

PJSC Enel Russia won the right to build the 201 MW Kolskaya project during the auction held in 2017 which tendered 1.9 GW of wind.

Equipped with 57 turbines and located on a total area of 257 hectares, the wind farm will be able to generate about 750 GWh of clean energy per year, while avoiding the emission of about 600,000 tons of carbon dioxide into the atmosphere. The commissioning is scheduled for the end of 2021.