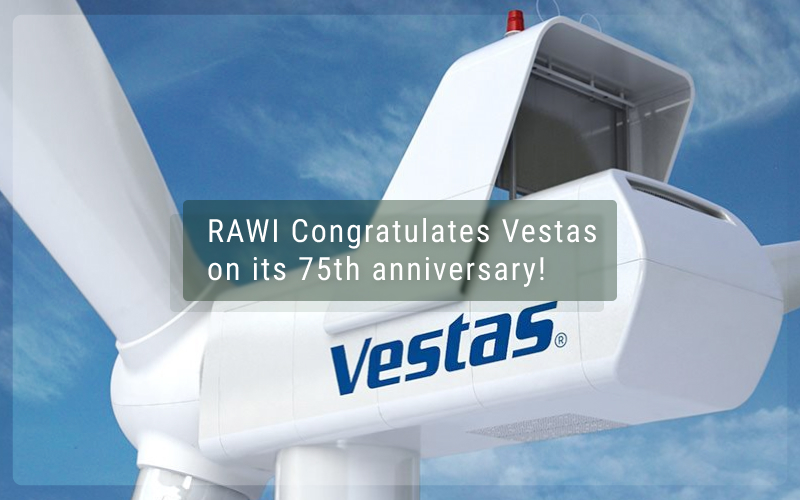 In November 2020, Vestas celebrates its 75th anniversary. The Russian Association of the Wind Power Industry (RAWI) is delighted to congratulate Vestas on its anniversary and express our gratitude for its active participation in the development of wind power in Russia. To date, the presence of the Danish company in Russian wind projects has reached a total installed capacity of 350 MW.

The Vestas’ history in Russia began in February 2018, when Vestas Manufacturing Rus LLC, the Ministry of Industry and Trade of the Russian Federation, and the Government of the Ulyanovsk Oblast signed a special investment contract which implied the implementation of an investment project at the territory of the region – “Creation and development of the production of blades of the rotor system of wind turbines, which have no analogues in Russia.”

In May 2018, Russian division of Vestas Wind Systems A/S – Vestas Rus – launched the production of nacelles for its 3.6 MW wind turbines in Dzerzhinsk, Nizhny Novgorod Oblast. Their production volume is about 80 pieces per year. The plant assembles nacelles, cooling and rotational control (yaw) systems, and tests the operation of the systems.

In December 2018, Vestas with the Spanish Windar Renovables opened its first Russian plant for the production of wind turbine towers WRS Bashni in Taganrog, Rostov Oblast. The design capacity of the plant is 110 three- and four-section towers per year. Each of them is 190 tons in weight, 85 metres high, and with a diameter of the base of 4.3 metres.

The production sites in Taganrog, as well as in Ulyanovsk and Nizhny Novgorod oblasts totally provide about 800 jobs.

In 2019, Vestas Rus delivered 78 sets of blades, nacelles and towers to the Wind Energy Development Fund’s construction sites. Each wind turbine requires three blades, so a total of 234 blades were shipped to the site in the Rostov Oblast. In total, the Fund plans to build 1,823.3 MW of wind farms in Russia by 2024.

In addition to that, the first outgoing batch of 48 wind turbine blades was shipped from the Ulyanovsk-based Vestas Manufacturing Rus’ plant to Denmark on April 14, 2020.

Vestjysk Stålteknik A/S, the precursor to the Vestas brand, was registered on 10th November 1945 Discover more about the company’s journey here: https://fcld.ly/ha9usk1