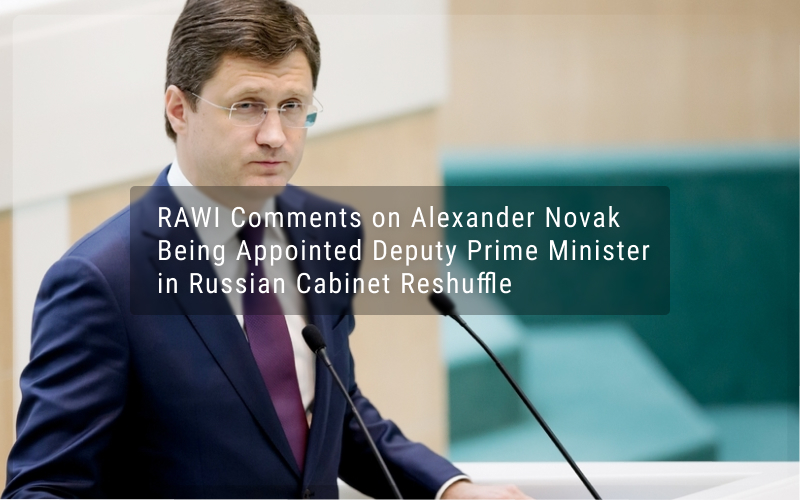 Yesterday’s appointment of Energy Minister Alexander Novak to the post of the Deputy Prime Minister, supposedly in charge of the fuel and energy complex, and Nikolay Shulginov, head of RusHydro, to the post of Energy Minister, caused a lot of comments from often not so responsible and well-informed Telegram-channels. Sometimes, they even deal in so-called ‘influence peddling’ based on the ‘butterfly effect’ principle. Wishing to increase the number of their subscribers, such information sources bring and publish undisguised gossip not willing to take any responsibility for the (un)reliability of the information provided. Naturally, all human beings have human feelings and premature comments can cause a slight confusion among market participants, which is what correspondents of such sources DO expect in the first place.

But there is a tradition which involves applicants for certain positions giving official comments, which investors are also guided by. And on 10th of November, the newly appointed Deputy Prime Minister Novak made exactly such a comment. The commentary dispels fears about the intention of the Russian Government to force renewables into isolated regions and weaken their positions in the wholesale market for electricity and power. Quote: “[the new Deputy Prime Minister] also pay attention to the development of renewable energy, including the development of export potential of solar energy technologies, increasing competence in wind power industry, as well as the development of energy storage systems and charging infrastructure for electric transport.”

For the sake of completeness of information provided and being NOT a news media, RAWI would like to share the full message of the Russian News Agency TASS dated November 10:

Among them is unlocking the Russian export potential and social decisions in the power industry.

Candidate for Deputy Prime Minister of Russia Alexander Novak, if elected, believes that his main goals will be to realise the export potential of Russia and solve social problems in the energy sector. Novak stated this in his speech at the plenary session of the State Duma.

“This year, the Prime Minister approved the Energy Strategy for the period until 2035, which assumes the solution of two key tasks. The first is to ensure the social and economic development of the country, including through supplying the domestic market with high-quality and reliable energy sources. This ensures a decent standard of living for Russians, industrial and social development of the country. In essence, this is ensuring the energy security of our country. The second key task is to realise the export potential and maintain Russia’s leadership in the global power and energy sources market. I consider the achievement of these two goals to be my main target, “ Novak emphasised.

Novak told about five areas of his activities in the oil and gas industry, which he plans to pay special attention to. “The first is the accelerated gasification of the country’s regions, such a goal was set by the President, and we must ensure a reduction in connection times, simplify procedures, introduce the ‘one-contact’ principle, a single gasification operator. The pertinent roadmap has been submitted to the government, and it is planned to consider it jointly with the deputies and regions in the near future,” he said.

The second task will be to increase the efficiency of the resource potential utilisation of the historical oil and gas production regions. In particular, Novak will work to stimulate hard-to-recover deposits, including the Bazhenov formation.

The third line of effort will be the development of Russia’s potential for the production of liquefied natural gas. Novak stressed that in 2019, after the launch of Yamal LNG, Russia became one of the five largest LNG producers, but the country’s potential is much higher, and in 2035, the country could claim more than 20% share of the global market with production volumes of 120-140 million tons of LNG in year.

“At the same time, it is necessary to continue developing the gas and oil transmission pipeline infrastructure, including those aimed at diversifying sales markets and line delivering natural gas,” Novak added.

The fourth focus area of Novak’s work may be the development of petrochemicals and an increase in non-resource exports.

Novak also advocated the continuation of international cooperation to stabilise energy markets. “It is necessary to continue active cooperation with the world’s leading economies and energy producers to ensure stability of the global energy market,” he said.

When it comes to the Russian electric power industry, Novak intends to work to meet the growing energy needs of the Russian economy. It is planned to pay special attention to the problems of the Russia’s Far East, as well as power supply of the Baikal-Amur Mainline and the Trans-Siberian Railway.

“[My tasks are] reliable and high-quality supply of electricity to consumers. [I intend to] implement a programme for the modernisation of generatin capacities, optimise the load on consumers, and pay special attention to the promotion of competition and market relations development,” Novak said.

Novak emphasized that it is necessary to continue the penetration of small-scale generation in hard-to-reach areas and pay attention to hydrogen energetics.

“Hydrogen economy is an individual and important innovation area. Russia may well become a leading player in this emerging market, and in a rather short term. Today all necessary steps are being taken to that effect. In October, the Prime Minister approved the road map for hydrogen economy development in Russian. Proposals to stimulate the development of hydrogen technologies will be prepared in the first quarter of next year on its basis,” Novak said.

At the end of October 2020, the Russian government approved a plan for the development of hydrogen economy for the next four years. The document provides for the development of a regulatory framework, government support for scientific research and projects to create production facilities, as well as ‘strengthening the positions of domestic companies in this promising segment of the world market’. The government plans to support pilot projects such as the creation of gas turbines and rail transport operating on hydrogen-methane fuel, and carbon-free hydrogen production units.

To attract new investments, the promotion of competition and development of market relations in the electric power industry should be given special attention, said the candidate for the post of Deputy Prime Minister. “Particular attention aimed at attracting new investments should be paid to the promotion of competition and market relations development in the [power] industry,” Novak said. He noted that the main development priorities are meeting the needs of the country’s economic growth and regional development.

Among the areas of the electric power industry, which should be paid special attention to, are reliable and qualitative provision of consumers with affordable electricity, implementation of the programme of modernisation of generation capacities, optimisation of the load on consumers, improvement of internal energy efficiency of the Russian power industry, including through more efficient use of existing reserves, he said.

“It is also necessary to continue the programme to support renewable energy, including the development of export of solar energy technologies, development of wind power competence. I also consider it important to create conditions for the introduction of electricity demand management, development of electricity storage systems, development of charging infrastructure systems for electric transport. Microgeneration development is an individual task. This will allow consumers, primarily the Russia’s general public, to sell excess energy,” Novak said.

According to him, it is also necessary to continue the development of small and distributed generation, especially in isolated and hard-to-reach territories, and among the cross-sectoral tasks, key priorities are the further continuation of work on import substitution of technologies and equipment in the fuel and energy complex, including software, the introduction of modern digital technologies, as well as the development of services based on artificial intelligence.