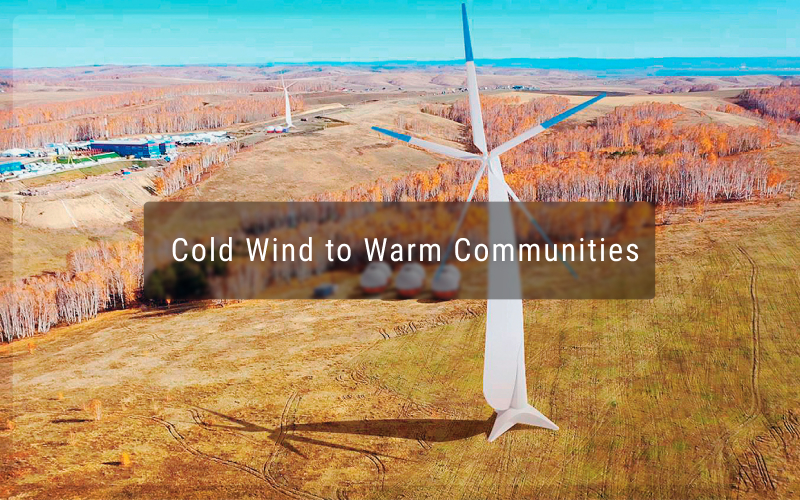 A Russian company has developed a unit for converting wind energy not into electric power, as is the case in conventional wind power, but into heat. It could solve the problem of heat supply to remote settlements and save tens of billions of public finances.

Wind power is still following the well-worn path as wind turbines generate electrical energy. But aeolic energy can also be converted into thermal energy. This use pattern can be developed in Russia. A company headquartered in Krasnoyarsk called OKB Mikron (a member of the RAWI, a part of the KANEX Group, a manufacturer of equipment for the mining industry) plans to create a wind-driven thermal hybrid unit which is going to comprise of a wind turbine and a thermal energy storage system. The necessary patents have already been obtained, and the Terus trademark was recently registered for the project. The company claims that the project is unrivalled in the world yet and is up to creating the first prototype as early as next year.

In a vortex of currents

Alexander Kantsurov, Director General of KANEX says, “We’ve counted no fewer than eight options for generating heat from wind energy. The simplest one is the primitive friction of steel on steel, when the rotation of the blades is transmitted to a steel disk, which rotates on another disk, and that is where the heat is picked up from it. According to our calculations, even using this method, it can work for thirteen years without replacing the disc. It won’t wear out. But we fixed upon a magnetic field with a rotor rotating around the stator, magnets being mounted on the rotor, and a magnetic field occuring, and vortex currents – aka Foucault currents – heat the stator. A pipe with liquid is inserted into the stator which when passing through it picks up the heat onto itself.”

According to the company’s technicians, the mechanical energy conversion ratio is going to reach 95% in this unit. The rest will be spent on a back-up low-power generator, while the electric power received from it will be used to support the work of the hybrid unit which includes lighting, pumps, etc.

Dmitry Salov, General Director of Mikron, began developing a device to convert wind energy into heat two decades ago. He says, “Wind power was partly my hobby and as an engineering enthusiast, I was very much taken with the ideas of green future. But since the wind turbines economics is not so simple, the design was gathering dust for a long time till three years ago the Mikron staff went balls on the wall with its execution.”

It became immediately apparent that the economics of such wind-powered thermal generation does not ring true when it comes to application in areas connected to the national power grid, but rather it is in demand in isolated areas. Terus plans to start off by using this solution in isolated, remote communities where heat is generated by stand-alone boilers working on supply coal or fuel oil. This is both unsustainable and expensive due to the high transport costs which means higher heat prices for local consumers.