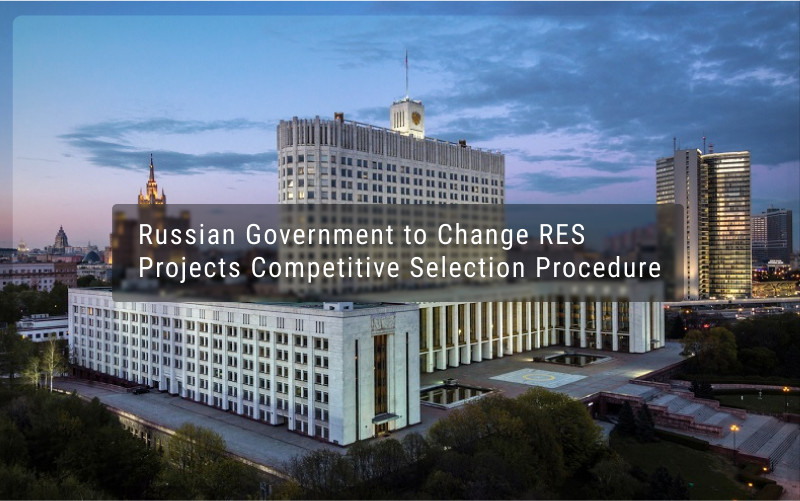 The RF Ministry of Energy proposes to change the procedure of selection of renewable energy projects under the programme of renewable energy support in 2025-2035 in the amount of 400 billion roubles, as follows from the draft resolution of the Russian Government published on the official regulation.gov.ru website.

The department considers it necessary to move from the previous assessment of projects in terms of unit capital costs to selection at a minimum one-rate price per kilowatt hour (including capital and operating expenditures). The first selection round under the new rules may take place in early 2021.

According to Kommersant, investors will continue to conclude long-term capacity delivery agreements with consumers (RES CDA), which guarantee payments from the market. However, the principle of payment calculation is about to change. Specifically, the investor will receive income from the sale of electricity on the day-ahead market (DAM), and the missing part of the payment will come from consumers’ payments for capacity.

The new programme will provide for fines for insufficient local content in equipment for renewable power plants (85% of the payment for solar power plants, and 75% for wind farms and small hydropower plants), as well as for failure to meet the 20% target for the export of equipment.

The Market Council reported that the principle of selecting projects at a one-part price (LCOE) is a key indicator of the effectiveness of any technology, including renewable energy sources, and it is already used in the selection of modernisation of outdated combined heat and power plants. The organisation expects the second stage of the programme to become a kind of ‘springboard’ for renewable energy facilities so in the future they would be able to compete on equal terms with other types of generation and no longer need support.

The Energy Consumers Association also believes that the transition to selection at a one-part price will stimulate suppliers to maximise production and develop technology and bring Russia closer to generally accepted world practice. However, the proposed deadline for the price of renewable energy sources to reach a competitive level by 2036 is too far, as foreign renewable energy projects are increasingly competing in price with conventional energy with no subsidies involved.

Green energy gencos criticise the proposals of the Ministry. According to Alexey Zhikharev, Director of Russia Renewable Energy Development Association, the draft resolution published is full of contradictions.

He said, “The principles laid down in the document have significantly increased the risks for investors; in particular, fines for non-compliance with requirements have been seriously increased. All fines used to be related only to payments for capacity, but now, given the transition to a one-rate price, the proposed sanctions put even revenue from the DAM at risk. We hope that the comments submitted during the public hearings will be heard by the authorities.”