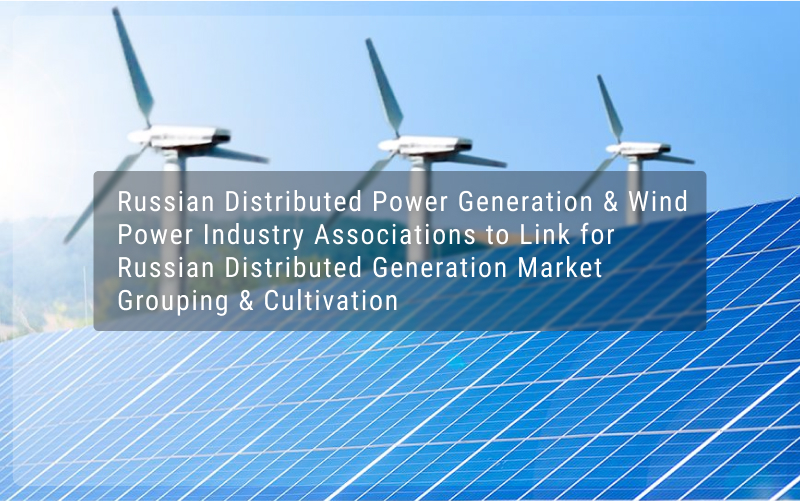 On September 24, 2020, the Russian Distributed Power Generation Association (DPGA) and the Russian Association of Wind Power Industry (RAWI) signed a cooperation agreement. The partnership between the two organisations will be aimed at stimulating the development of the small-scale distributed power generation industry in Russia and the joint performance of innovative energy projects.

During a recently held webinar, the heads of the associations – Maxim Zagornov and Igor Bryzgunov – answered questions from the press and market participants about promising niches of the partnership and the future of small-scale distributed power generation industry in Russia.

One of the strategic goals of the agreement is to combine common professional competencies, administrative and labor resources for the grouping and cultivation of the distributed generation market in Russia.

Maxim Zagornov, president of the DPGA, said, “Both our associations, each in its own industry, have achieved significant results. And even as we speak it is clear that there are converging interests. We are facing common problems with both existing legislation and the introduction of national standards. I am sure that within our associations, by combining our efforts, we will be able to effectively resolve many issues.”

“This is the landmark event when two associations uniting participants of the distributed power generation market agree on cooperation. Such cooperation is necessary, in my opinion, for us to agree on actions and as a result, to make our joint work more effective. After all, constant dropping wears away a stone, and when there are two drops the stone breaks down twice as fast,” said Igor Bryzgunov, Chairman of the RAWI.

According to Zagornov, “Today, 80% of large-scale generation facilities, especially in remote areas, have been in operation for over 40 years. Obviously, the objects will eventually fail in a 5 or 6-year-period, and we can slide deep into the energy pit. So, our intention is to create hybrid systems combining gas and wind energy. And thus, through our joint efforts, Russia’s major issues regarding power supply to remote areas and small and medium-sized businesses would be closed.”

In addition, at the initiative of the parties, it is planned to unite efforts to promote initiatives among the legislative and executive authorities for the development and technical regulation of the distributed technologies market, to contribute to the formation of an effective regulatory and legal framework. In particular, according to Igor Bryzgunov, the microgeneration act needs considerable revision.

He said, “I would not call this legislative act workable. It is raw and, like any legislation, requires improvement. Although, of course, it is still well that it is here in the first place. There are restrictions on the upper limit; there is some unfavourable situation for the owner in terms of pricing when they want to sell electricity at a wholesale price. There is still room for improvement, and we will work on it together with the DPGA.”

The Russian Association of Wind Power Industry is an independent nonprofit entity established in 2004 and cultivating the wind energy market. The Association’s goal is to provide positive hands-on assistance and support to market participants in their entrance to the market, mastering the production, developing of wind parks and receiving the orders for the wind turbines components, for design, construction and logistics services and other services, rendered by its members. The increasing list of 167 members of the RAWI includes the leading global wind turbines manufacturers, the Russian and foreign industrial and power engineering flagships, logistics, engineering, design & construction and insurance companies, research & development and educational establishments and diplomatic organisations. The RAWI has a high level of competence, lobbies the interests of its members and, thanks to an established wide circle of associates in relevant government agencies and state-owned corporations, contributes to the development of the wind business of its members. Internal communication and interaction and the competencies exchange in the Association also contribute to the development of the business of members of the Association.