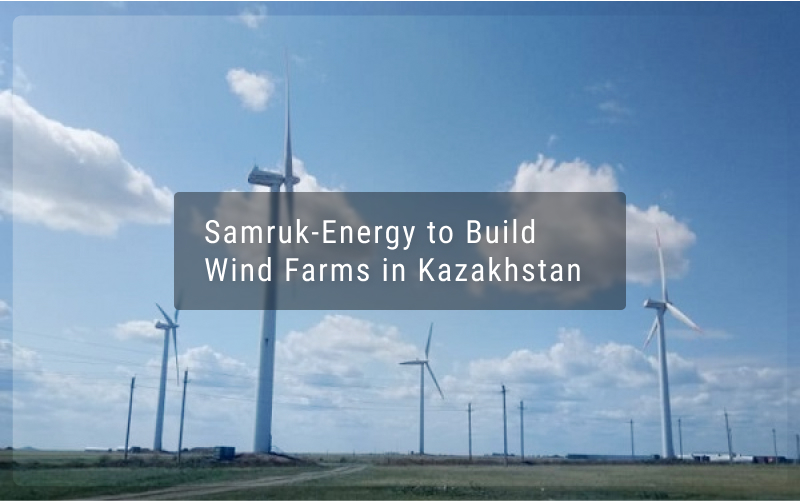 Samruk-Energy has launched two new renewable energy projects in Kazakhstan. The wind farms will be built in the Almaty and Akmola regions.

The “Construction of a 60 MW Wind Power Plant in Sheleksky passage with the prospect of expansion to 300 MW” project is being implemented in Enbekshikazakh district of the Almaty Region. The station will consist of 24 wind turbines with total capacity of 60 MW, a substation and transmission lines. Construction and installation works have started at the production site. The project is being implemented by Energiya Semirechya, a company within the Samruk-Energy structure.

During the construction of the wind farm, it is planned to create 300 jobs, as well as 14 permanent jobs after the station is launched. It is expected that the wind farm will generate 225,750 thousand kWh of electricity per year. At the same time, the wind turbines can be used in a cold continental climate with temperature ranging from -30 to +43 °C, seismic activity of 10 points, and wind class II. The wind turbines have technical and environmental characteristics that meet the international IEC 61400-series wind turbine safety standards.

The second wind power plant is located in Erementau town of the Akmola Region. According to the wind potential of the area, it is planned to install 11 wind turbines with a unit capacity of 4.8 MW and a total installed capacity of 50 MW produced by the German-based ENO Energy GmbH.

The project is implemented by Ereymentau Wind Power, also a part of Samruk-Energy Group. Its implementation will allow employing 100 individuals with involvement of local residents for the construction period. During the operation period, the station will be served by 16 technicians.

Power generated at the new wind farms in the Almaty and Akmola regions will be supplied to the National Power Grid of Kazakhstan.

According to experts, Kazakhstan has great potential for the use of renewable energy sources and, as noted, the transition to green energy, the introduction of green technologies is a growing trend in the global economy.

Power generation by Samruk-Energy’s renewable energy facilities – solar power plants, wind farms, biogas plants, small HPPs – amounted to 342.5 million kWh in 2019 or 14.3% of the total amount of renewable electricity in the country, and the company’s share in the production of clean electricity in 2019 increased by 1.2% compared to 2018, which amounted to 2924.2 mln kWh.