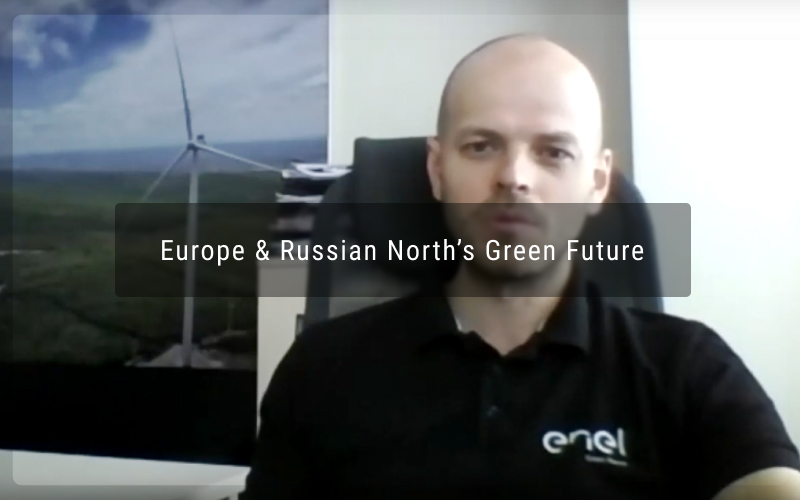 In Russia, most areas of decentralised power supply, where electricity is generated from small, autonomous sources, usually diesel-generator units are located in the subarctic. The North is an extremely fragile ecosystem, so the most urgent technologies are those with no or minimal negative impact on the environment. Solar and wind power can be an alternative and efficient solution for replacing a great deal of diesel fuel.

This was the subject of the “Renewable Energy in the North in the Light of the European New Green Course” webinar organised by the Russian Association of Wind Power Industry on July 16, 2020.

The EU is poised to adopt the European Green Deal, a series of agreements designed to make the EU economy climate neutral by 2050.

Ksenia Vakhrusheva, Ph.D. in Economics, analyst and head of projects at the Environmental Rights Centre Bellona (St. Petersburg), noted the European Green Deal is a big strategy that on the one hand involves identifying priority sectors to stimulate their work and on the other hand accumulating financial resources to make this incentive work. The ultimate goal in the EU countries is zero emissions and zero greenhouse gas emissions as well as minimisation of production and consumption waste.

According to the European Commission, for the period from 2020 to 2030 in the EU countries, it is planned to spend about 1 trillion euros to support the European Green Deal. Just over 50% of this amount is expected to be allocated from the EU budget, by national governments. The rest – about 300 billion euros – will be spent on other resources, including private investments.

The expert noted, “As of today, we can say that only half of the required funds are guaranteed. The other half still needs to be attracted, to encourage investors to invest in the green industry. Support for such projects is planned under the same scheme, through national governments.”

Meanwhile, there are EU countries that bear the risks of losses in the economy from the Green Deal. For the most part, these are not countries, but individual regions, where the most of local industry facilities depend on the coal industry.

According to Ksenia Vakhrusheva, a mechanism of fair transition is specially provided to support such regions, which accumulates funds; a fund has been created, where 100 billion euros are already guaranteed. A specific mechanism for the distribution of funds has not been adopted yet, but there is a concept and it will be further developed.

In the context of the Green Deal, renewable energy sources (RES) play a major role. The focus is on improving the integration of the energy systems of all EU countries so that those areas that can provide more renewable energy production could provide clean energy to as many other areas as possible.

“In the Green course, the power industry and new technologies that will be most intensively supported are individually indicated. First of all, this means offshore wind energy being an industry with the greatest potential. It also involves hydrogen production and energy saving technologies,” the expert said.

While the whole world is discussing the adoption of the EU Green Deal, a series of agreements designed to make the EU economy climate-neutral by 2050, Enel Russia continues the construction of the Kolskaya wind power plant (WPP), one of the largest renewable energy projects beyond the Arctic Circle. It is planned that the wind farm produces about 740 GWh a year, while avoiding the emission of about 600 thousand tons of carbon dioxide into the atmosphere.

Vadim Ulanov, regional representative of the Enel Rus Wind Kola LLC, said that the Kola Peninsula has huge wind potential, outstanding landscape values and acceptable weather conditions. Having made a decision to build the Kolskaya WPP, the first stone of the future wind farm was laid in September 2019. It will consist of 57 wind turbines (WT), and will be located on an area of about 257 hectares. The volume of investments in the project is about 273 million euros.

Vadim Ulanov said, “This project is really difficult, but where some would say difficult, we say interesting. Formally, there are predictable moments, for example, a so called ‘northern price hike’: labour and materials are more expensive. The northern weather also throws you a curve. Last winter was really severe. Roadblocks were set up about 45 times at the road to the construction site during the winter.”

When asked about possible constructive changes for WTs at the Kolskaya WPP taking into account the Arctic climate, the representative of Enel Rus Wind Kola said that at the moment the basic Arctic package provided by Siemens Gamesa supplier is quite enough to cope with the Murmansk rough weather.

One of the listeners of the webinar asked whether Enel Rus Wind Kola was considering entering the market of isolated areas in order to replace diesel generation with renewable energy facilities.

Vadim Ulanov answered, “The company doesn’t consider it, not at the moment at least. But this topic is very interesting. To date, about 700 remote settlements have been officially registered, where it is potentially possible to use various types of renewables and hybrids.”.

Speaking about the government’s support of projects in the subarctic, the expert noted that now there are already such subsidies. They are both strictly oriented as in case of power supply agreements and bear general regional and federal significance.

In addition, an Arctic act has recently been adopted. Under this law, a company entering the northern market, whether or not it has a green project, can claim sufficiently substantial benefits, including zero property and income taxes for a certain period. Now, it is enough for investors to get land for the project, even without going through competitive bidding. Plus, there is a large number of other subsidies from the RF Ministry of Industry and Trade.

“The law hasn’t granted any benefits that are strictly oriented on green power industry. But we are waiting for them, because the potential is quite serious, especially given the tendency of industrial clusters’ transition to electric heating. The closest example is the city of Murmansk, where practically in the centre of the city, there is a huge oil-fired boilerhouse issuing emissions into the atmosphere,” – Vadim Ulanov explained.

Concluding the webinar, the moderator of the webinar Yuri Sergeev, ecologist, senior advisor on energy and electromobility at the Bellona-Murmansk, asked the speakers a question: how do you see the impact of the green course on the North in the future 10 years?

“In the terms of the development of the northern territories and the implementation of the green course in the EU, the Nordic countries will make good progress in the decarbonisation of their economy within the next 10 years, and above all, in the power sector,” – said Ksenia Vakhrusheva.

Further, Vadim Ulanov said, “For the next 10 years, our primary goals are the construction of wind and solar power plants, the development of other renewables and the application of innovations, as well as attracting more specialists into this sector. Because wind turbines, wind farms and solar power plants require people with some serious knowledge and training. Even if we do not have experience, we ourselves are ready to provide the opportunity to get it. Our greatest asset is people who know the way to properly perform these tasks, to lead us to that sustainable future and fuel and energy balance, which is finally getting a green vibe to it.”

The full version of the webinar is published at RES Academy