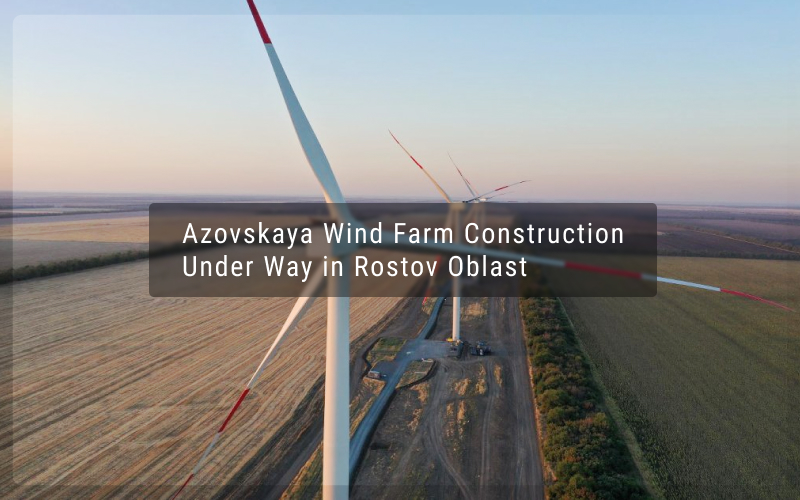 PJSC Enel Russia continues installing wind turbines at the construction site of the Azovskaya WPP wind farm in the Rostov Oblast. The works are carried out following the completion of the installation and concrete casting of foundations.

The wind farm will be equipped with a total of 26 turbines and will be located on an area of 133 hectares. The installed capacity of each turbine is about 3.5 MW.

The installation of the wind turbines is one of the final stages of the wind farm construction, followed by its commissioning with the subsequent supply of the generated electricity to the grid of the Russian Unified Power System.

Enel Green Power, a global division of the Enel Group responsible for the development and operation of renewable energy facilities around the world, employs both Russian and international specialists to install the turbines.

Let us recall, Enel Russia PJSC won the right to build the 90 MW Azovskaya wind farm during a wind projects auction held in 2017 by the Russian Government. The total capacity put out to the tender was 1.9 GW.

The wind park’s design production is about 320 GWh per year, and it will help avoid the emission of about 250,000 tons of carbon dioxide into the atmosphere annually.

The total amount of Enel Russia’s investments in the Azovskaya WPP is about 132 million euro. This project was included in the regional governor’s priority investment projects list.

In addition to the wind park, Enel Russia is implementing two more wind power projects: the Kolskaya WPP (201 MW) in the Murmansk Oblast and the Rodnikovskaya WPP (71 MW) in the Stavropol Krai. The Enel Russia’s total investment in the three wind farms is estimated at 495 million euro.