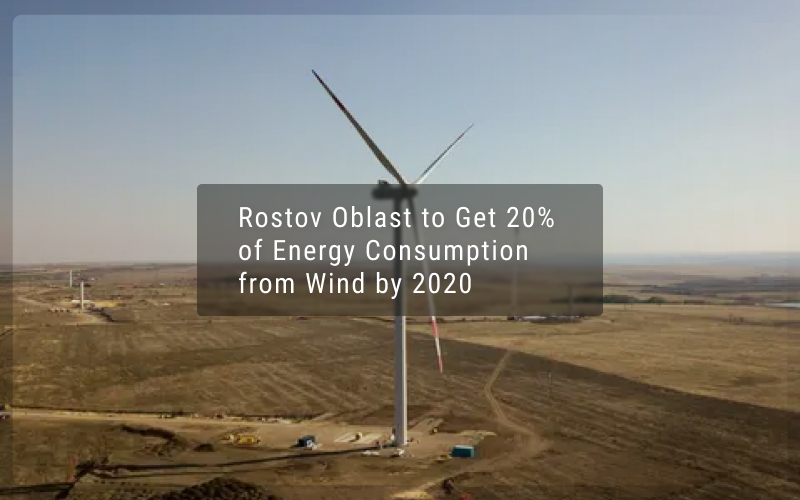 The installed capacity of wind power plants (WPP) commissioned in the Rostov Oblast in 2020 has reached 300 MW. As the result, the region comes in top place in Russia in terms of wind power generation.

Igor Sorokin, Deputy Governor and Minister for Industry and Energy of the region, said at a meeting of the regional government, “In 2020, the Vetroenergetika Management Company commissioned three wind farms with a total capacity of 300 MW, and the electricity generated is supplied to the wholesale market. This allowed the Rostov Oblast to become a leading region in wind power generation in Russia.”

According to him, the Vetroenergetika MC, LLC continues construction of the fourth wind park. The 100MW Kazachya WPP will be built in Kamensky district, the town of Donetsk, the Rostov Oblast, Russia. The volume of investments on all the Vetroenergetika MC’s projects of is estimated as 60 billion roubles.

Igor Sorokin said that totally, 8 wind farms are planned to be built in the Rostov Oblast. Now, the company Enel Rus Wind Azov is constructing the 90 MW Azovskaya WPP. The commissioning is also planned for this year. The provider of financing will invest about 11 billion roubles in creation of the wind farm.

In addition, the NovaWind is engaged with the design and construction of a wind farm with a capacity up to 120 MW. The commissioning is planned for 2021, the volume of investments is also about 11 billion roubles.

At the same time, a wind turbine towers manufacturing plant was launched in the Rostov Oblast in the December 2018. With industrial capacity of more than 600 pieces of equipment per year, the amount of financing amounted to more than 700 million roubles. The region expects that around 20% out of all electricity consumed in the region comes from the wind by 2022.