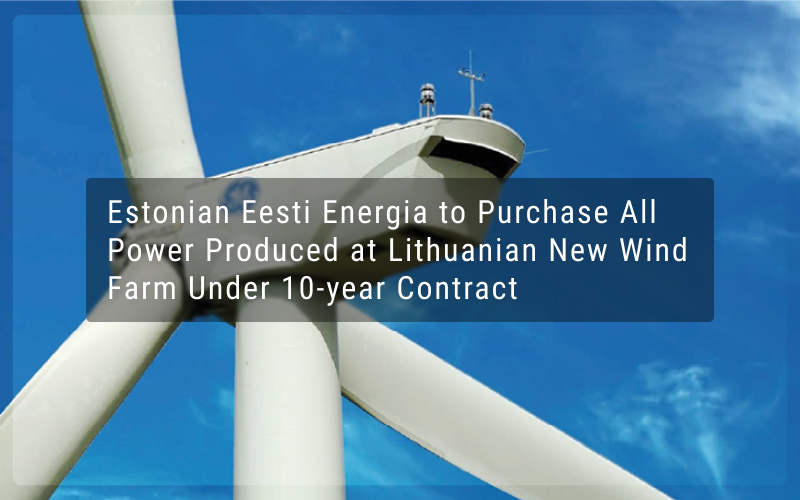 Estonian Eesti Energia and Lithuanian E energija signed an agreement according to which the Estonian concern will purchase all green power produced by the future Lithuanian wind farm for 10 years.

The green electricity production at the E energija’s 68.9 MW wind farm in Telšiai, which starts up in 2022, is planned to amount 235 GWh per year. Eesti Energia will supply power to households and corporate clients.

Contracts for the purchase of green energy have never been concluded on such a long-term and such a large scale in the Baltic States. It was Eesti Energia’s readiness to purchase all products of the wind farm within 10 years that became the key factor in financing the wind power plant. The largest contract for the purchase of green power in the Baltic States was possible thanks to good cooperation between E energija, General Electric and SEB.

“As an international energy company, our task is to make efforts in every domestic market to provide more innovative solutions for our customers and cleaner energy production. We want to do this in different ways, so we contribute as a renewable energy company and as a purchaser of this power to offer our customers even more clean energy. We are constantly looking for new ways to expand our green energy portfolio,” said Margus Vals, Member of the Management Board of Eesti Energia.

Eesti Energia has a long history of doing business in Lithuania. Power has been sold in this country for more than 10 years, and the renewable energy Group’s subsidiary, Enefit Green, operates five wind farms there, and almost half of the company’s annual wind power output comes from Lithuania.

In Lithuania’s weather conditions, wind power is a widely available and highly competitive source of energy, and therefore it should play an important role in achieving the common objectives of the European Union and ensuring the necessary amount of electricity production for the country. The E energija’s wind park in in Telšiai is a joint project of E energija and GE, which will supply 13 of the largest of their kind onshore 5.3 MW wind turbines.