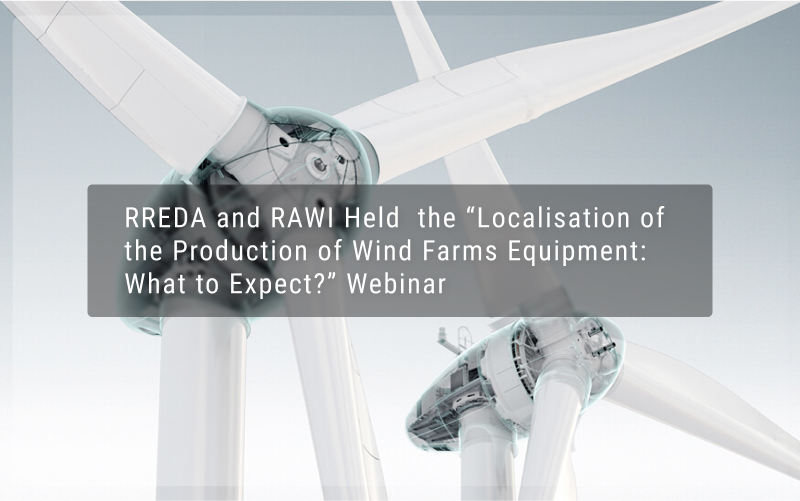 On May 19, the Russia Renewable Energy Development Association (RREDA) and the Russian Association of Wind Power Industry (RAWI) held a webinar titled “Localisation of the Production of Wind Farms Equipment: What to Expect?”

The discussion was attended by:

Denis Klyapovsky , Head of the Department of development of power engineering, electrical and cable industry,  Ministry of Industry and Trade of the Russian Federation. Member of the Commission for determining the local content of a generation facility using renewable energy sources.

“Our industry faces the important task of increasing non-resource exports and should rely on fast-growing sectors; renewable energy is one of them. The lack of own equipment production in the country will mean a complete technological inferiority and lack of scientific and engineering competencies. Several years ago, consortia of responsible investors began to form in Russia, which, despite all the difficulties, managed to assemble a difficult “jigsaw puzzle” of the production localisation. A number of parameters, including localisation and export requirements, are to be substantially revised in the new renewable energy support programme, which is being actively discussed now. We hope that the overall course will remain balanced and carefully coordinated.

The capacity of the national market remains an important issue. If the volume of annual commissioning reaches 600-700 MW, it will improve the efficiency of current production and increase exports, but it is unlikely to talk about large investments in technological development and a significant role in the global market. To achieve this goal, the planned indicators should exceed 2000 MW per year” – noted Alexey Zhikharev, Director of the Russia Renewable Energy Development Association during the webinar.

“The development of the wind energy market depends on the attitude of the state. It is important for Russian and foreign investors – those who build wind farms, produce wind turbines – to understand how serious the state is about this industry and what the market’s prospects are. We are ready to develop new manufacturing facilities, to improve technologies, but as long as the support to the industry is serious and here to stay. As you know, the discussion of new conditions for support of renewable energy for the period 2025-2035 has been going on for a long time. In addition to creation of new industries in the country, the government desires to rest a new export sector on the investors’ shoulders. And this is understandable, but for this to happen, decent volumes of the market must be present, and not on the “leftover principle” – commented on the situation Igor Bryzgunov, chairman of the RAWI.

The Association takes an active part in the development and preparation of opinions on draft legislative and regulatory acts, orders, instructions and other regulatory legal acts related to the development of the renewable energy sector in the Russian Federation; represents the interests of its members and participates in the process of decision making within the framework of the state policy definition in renewable energy, as well as interacts with infrastructure organisations of the power engineering sector to ensure the representation of the Association in governing bodies.

Russian Association of Wind Power Industry (RAWI) is an independent nonprofit entity established in 2004 and cultivating the wind energy market.

The Association’s goal is to provide positive hands-on assistance and support to its members in their entrance to the market, mastering the production, developing of wind parks and receiving the orders for the wind turbines components, for design, construction and logistics services and other services, rendered by its members.