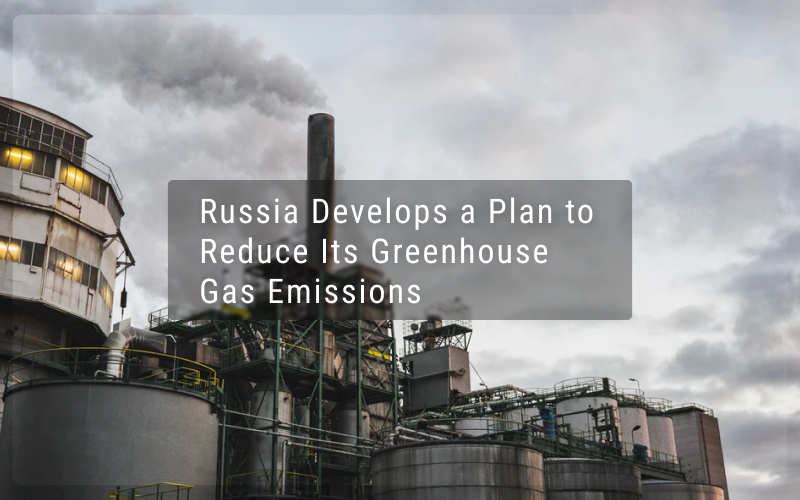 Russia has developed a strategy to reduce greenhouse gas emissions by 2050. Its stated goals look rather modest when compared to those of other countries. It’s about the Russian forests’ real bad shape and the unwillingness to burden the business with new taxes, experts say.

The Ministry of Economic Development prepared a long-term development strategy for Russia which implies low greenhouse gas emissions until 2050. A copy of the document is in tha hands of the RBC Newspaper, and a representative of the Ministry confirmed its authenticity.

The Strategy is a follow-up to the Paris Agreement on climate, under which countries are trying to keep the global average temperature increase between 1.5 and 2°C. Moscow ratified this agreement in September 2019.

Russia cannot ignore the climate agenda anymore as this situation creates risks for sustainable development of the national economy beyond 2040, the strategy says. 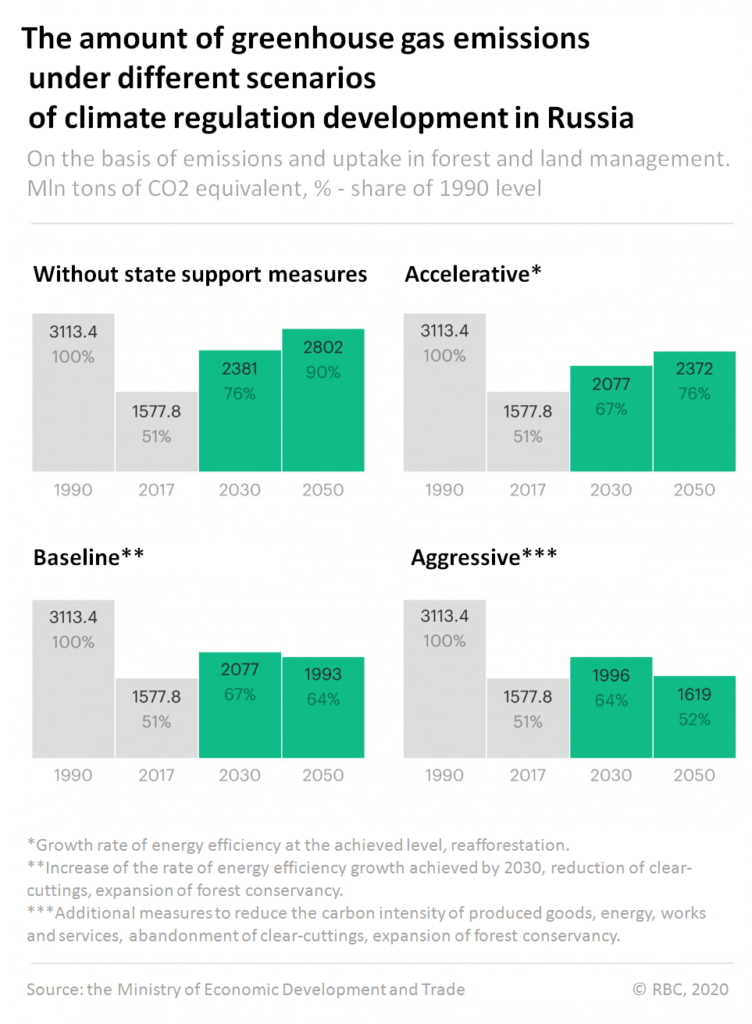 The Ministry of Economic Development describes four scenarios of climate regulation development: baseline, aggressive, accelerative and scenario without state support measures (see diagram). For now, the Ministry proposes to take the baseline scenario with emphasis on energy efficiency of the economy and forest conservation as a basis. This scenario may be logical until about 2030, but then many countries are likely to move to forced greenhouse gas emission reductions, which will also put pressure on Russia, said Alexei Kokorin, head of the Climate and Energy Program at WWF Russia, to RBC. In this case, he said, the country will have to switch to the aggressive scenario of climate strategy, but it’s better to do it sooner.

The Ministry of Economic Development does not indicate how much it will cost to implement the strategy until 2050, but measures indirectly related to reducing emissions in 2019-2020 is estimated at 4.3 trn roubles.

What does the baseline scenario stipulate

In the baseline scenario, Russia would reduce greenhouse gas emissions by 36 percent by 2050 (compared to 1990), up to 2 billion tonnes of CO2 equivalent. At the same time, the accumulated reduction in emissions will amount to 80-81 billion tons, or about 8% of the global carbon budget (the permissible amount of carbon dioxide that can enter the atmosphere without causing a temperature increase of more than 2 degrees).

In this scenario, the Ministry of Economic Development proposes the following measures.

So far, the industry has been reluctant to save energy: in 2018, domestic companies spent 44 bln roubles for this purpose, while spending 8.5 trn roubles on energy resources, according to the strategy. The situation with forests is also deteriorating: the area of clear-cuttings is steadily exceeding the area of forests, where reforestation is taking place, more and more forests are being destroyed by fires, the document says.

How is the aggressive scenario different

Under the aggressive scenario, Russia would reduce emissions by 36 percent by 2030 and by 2050 would reduce them by 48 percent, to 1.6 bln tonnes of CO2 equivalent. Hydrocarbon neutrality (zero net greenhouse gas emissions) will be achieved by 2100. At the same time, Russia will make the most significant contribution to limiting global surface temperature growth to 1.5°C, and the accumulated reduction of emissions will amount to 90 bln tonnes of CO2 equivalent by 2050.

In the aggressive scenario, additional measures will be implemented.

How do other countries, cities and companies reduce their emissions

Germany plans to reduce emissions by 2050 by 80-95 percent compared to 1990, the UK – by 80 percent, Japan, France and Canada – by 73-78 percent. Meanwhile back in 2019, the European Commission announced plans to adjust the economic course of the EU to form a carbon-neutral space in Europe by 2050 (Green Deal). For this purpose, it was proposed to create an investment fund and establish a border carbon tax. The cost of implementing this programme is estimated at 1-2% of GDP, according to the Russian climate strategy.

The United Nations estimates that cities account for up to 70% of global anthropogenic greenhouse gas emissions. As a result, more than 100 cities have announced their intention to become carbon neutral by 2050. Some want to reach the goal earlier: Stockholm – by 2040, Copenhagen – by 2025 and Liverpool – as early as this year.

Why Russia’s goals are lower than the world’s average?

Russia’s goal to reduce emissions by 48% by 2050 in the aggressive scenario is not ambitious when compared with the goals of leading countries, says Yuri Melnikov, Senior Analyst on Electric Power, SKOLKOVO Energy Centre Moscow School of Management. In fact, the scenario assumes maintaining the level of emissions already achieved in Russia. It cannot be ruled out that this goal will be achieved without special measures – simply because economic growth will be much lower than the figures that the Ministry of Economic Development took into account (2.6-2.9% per year), the expert said. 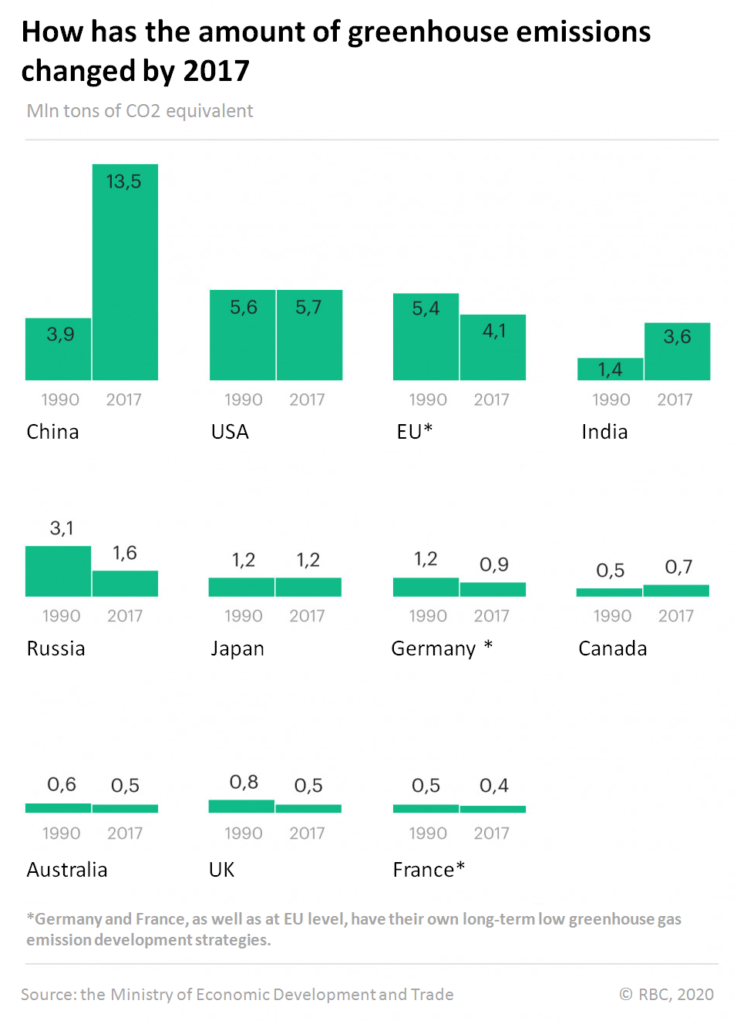 At the same time, by reducing emissions compared to 1990, Russia will increase them compared to 2017 (which is taken as another reference point), as it follows from the strategy. This is explained by the sharp decline in production and, consequently, greenhouse gas emissions in the 1990s following the collapse of the USSR. In 2017, emissions in Russia were half as low as in 1990, Melnikov said.

Perhaps, the regulator believes that the risks of a scenario with achieving carbon neutrality by 2050 outweigh its positive effects, the expert argues. The price of emissions in Europe reaches tens of euros per ton, it is a serious additional item in the costs of companies, Melnikov explains.

Russia will still have to introduce fees on carbon-intensive products when they appear in importing countries, says Kokorin. It would be better if companies paid into the Russian budget rather than into the budgets of other countries, he explains. While in 2018 only 15% of global emissions (taxes and fees) were regulated, that figure could rise to 50% by 2050, the Ministry of Economic Development and Trade said in its strategy.

Russia could have adopted much more ambitious emissions targets by 2030 if it hadn’t for the bad situation with forests, says Kokorin. “The forests are ageing and carbon dioxide uptake is decreasing, with a huge number of ecologically and climactically illiterate clear-cuttings being made with a lack of improvement cuttings (dead standing tree cleaning, etc.) that reduce fire risks. As a result, measures to improve energy efficiency and modernise the energy sector are almost completely leveled.

The 2030 target to reduce emissions to 67 percent compared to 1990 (in the baseline scenario) is a step forward from the previous level of 75 percent (this target was announced in 2018, when Russia has not yet ratified the Paris Agreement), argues the representative of the Ministry of Economic Development. In addition, Russia has already reduced emissions by 41 bln tonnes of CO2 equivalent and is the absolute leader on the subject. In fact, Russia has delayed the global warming process for almost a year, while other countries, on the contrary, have accelerated it, he concludes.

Will the collapse of oil prices change Russian plans

When preparing the climate strategy, the Ministry of Economic Development took into account the macro-indicators of the long-term forecast of social and economic development of Russia until 2036, said a representative of the ministry. It assumes the price of Russian Urals oil at $57.6 per barrel in 2019-2024 and is expected to be $55.5 per barrel by 2036.

In early March, following the collapse of the OPEC+ production cutback deal, the oil price collapsed by more than 30%, Urals cheapened to less than $19 per barrel on March 18, but then prices corrected. The Ministry plans to update the strategy as the social and economic forecast changes, says the representative of the Ministry of Economic Development.

Emissions regulation globally is primarily linked to the global community’s concern about the global climate threat, Melnikov said. In this regard, the price of oil does not seem to be a main driver. At the same time, the collapse of oil prices may somewhat slow down the pace of energy efficiency development, especially in the transport sector, the expert concludes.