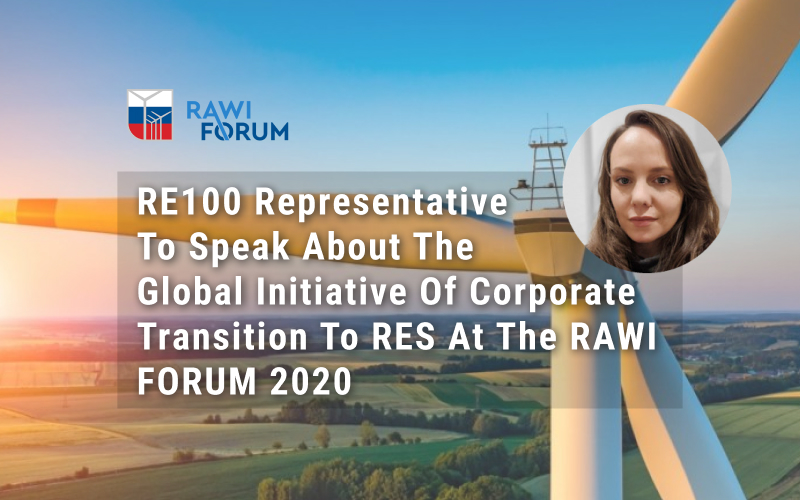 Aleksandra Klassen, international operations lead of RE100, is a new participant of the forum’s “Wind Energy in Russia: Priority or Experiment?” plenary sitting. To the heads of major international and Russian companies, Aleksandra will present a report on the achievements and important moments of RE100 activity, which implies voluntary, annually tracked commitments of the business community for the transition to renewable energy.

RE100, an initiative run by The Climate Group in partnership with CDP, includes the most influential companies around the world, (headquartered largely in the U.S., Europe, and Asia Pacific,) which have set a goal of sourcing 100% of their global electricity consumption from renewable energy.

To date, 221 companies including IKEA, Apple, BMW, Colruyt Group, Google, LEGO group, Tata Motors and other trade and financial organisations have joined RE100. These companies have set a public goal: to achieve 100% renewable energy consumption by, at the latest, 2050. Many companies plan to achieve this goal by 2028 and 15% already have.

The total power consumption of RE100 member companies is similar to that of a medium-sized country. At the end of 2018, the electricity consumption of the corporations participating in the initiative was 228 TWh/year, which is comparable to the consumption of Indonesia or the RSA.

The RAWI FORUM International Wind Energy Forum is being held on February 19-20, 2020 in Moscow. The Russian Association of Wind Power Industry (RAWI) with the support of the Ministry of Industry and Trade of the Russian Federation and the Russian-German Chamber of Commerce is gathering professional participants of all sectors of the Russian and global industries to inform about the current status of changes in the Russian wind energy market, identify new growth points, discuss development problems and possible ‘forks in the road’ of the wind energy development in Russia.