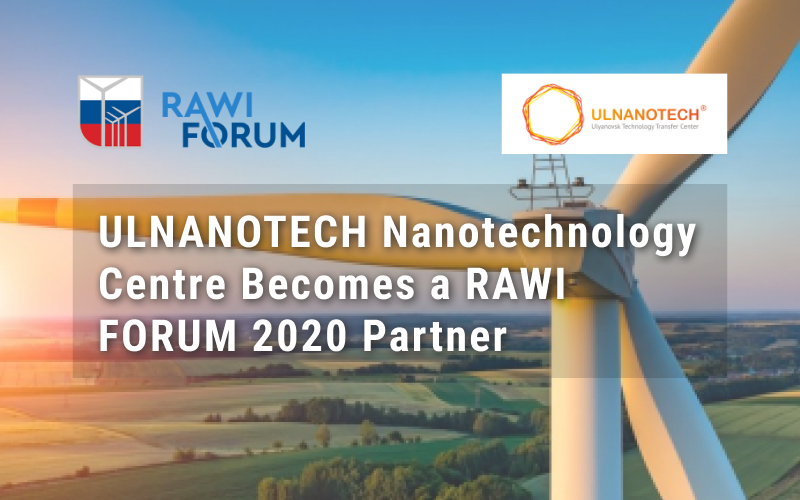 The RAWI FORUM 2020, International Wind Energy Forum, which is being held in Moscow at the World Trade Center on February 19-20, 2020, will be supported by the ULNANOTECH Nanotechnology centre (the member of the RAWI).

The main objective of the Forum is to facilitate the development of wind energy in the Russian Federation, as well as treatment and promotion of implemented renewable energy projects.

The Nanotechnology centre is guided by the understanding of global technological trends and alternative energy is one of the areas in which the most significant achievements of the next 10 years will be concentrated.  Therefore, the Nanotechnology centre team, together with federal and local authorities, development institutions and RUSNANO Group, is actively involved in the development of a new industry for the country, the wind energy. As a result of such efforts, Russia’s first commercial wind farm was established in Ulyanovsk. Now such wind farms are being built in other regions as well: the Republic of Adygea, Rostov and Murmansk Oblasts, Stavropol Krai.

The Nanocenter is building infrastructure for the development of technological entrepreneurship, dealing in promising technologies scouting and creating technological startups on this basis. For example, in 2015, the Nanocentre created Altren, a company which is engaged in the integration of the project to create a cluster of alternative energy and energy-saving technologies in the Ulyanovsk Oblast, with the introduction of the best achievements in this field of energy industry.

And one of the thematic platforms is represented by the Altren with the “Small wind power generation. How to get the market spinning up?” topic within the framework of the Forum, where the participants of the session will discuss the conditions of stimulation of the use of wind energy systems as an alternative and supplement to the energy supply from hydrocarbon energy carriers.

The development of the renewable energy market requires the creation of jobs for the needs of the industry, so in 2017, based on the Nanocentre, the Ulyanovsk State Technical University’s (UlSTU) Wind Energy Technology department was established to train highly qualified personnel for the wind energy industry. The “Wind energy labour market” session is going to discuss which segments of the RES market experiences a lack of personnel and qualifications, and what the future of education in Russia should be. The session is to be conducted by the Head of the Wind Energy Technologies Department of the UlSTU and the “Wind energy technologies” nanotechnology centre.

The Nanocentre together with RUSNANO and the Denmark-based Vestas launched a joint venture in Ulyanovsk to produce composite blades for wind turbines in late 2018. Now the plant produces both export products and supplies domestic Russian wind farms.

ULNANOTECH (Ulyanovsk, Russia) is a nanotechnology centre (part of the RUSNANO nanotechnology centres network) engaged in investment and support of technological entrepreneurship at early stages, technology scouting, creation of technological start-ups. It has the status of a high-tech tech park (according to the Association for the development of clusters and technology parks of Russia), and since 2017 has been a member of the Russian Association of Wind Power Industry.