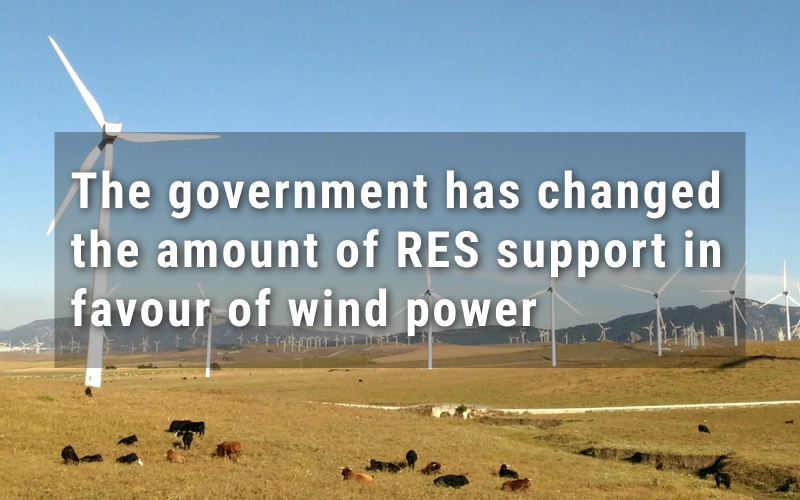 The government has redistributed again the quotas of support for RES for 2025-2035 between investors in solar and wind energy generation, according to the minutes (which are at the Kommersant’s disposal) of the meeting of December 5 with Deputy Prime Minister Dmitry Kozak. According to those, the investment threshold for the construction of wind power plants (WPP) was increased by 9.25 billion roubles, to 231.25 billion roubles, while in the construction of solar power plants (SPP), it decreased by the corresponding amount to 138.75 billion roubles. Only 30 billion roubles will still be allocated to finance small HPPs. Kommersant received confirmation of the results of the meeting in the office of Deputy Prime Minister.

The first programme to support RES will see out in 2024 and 5.4 GW of new capacity will be commissioned. The return on investment in construction is due to increased payments from the wholesale energy market. Investors in RES have achieved an extension of support until 2035. Participants are expected to be required to meet certain localisation level and export requirements. The term of return of investments under the new programme is until 2050, the total load on the energy market will amount to 725 billion roubles.

The proportion in financing between the SPPs and WPPs will thus be 37.5% by 62.5%, which does not satisfy investors in the construction of solar power generation. The main investor in the construction of SPPs, Hevel (the JV of Renova and Ream Management), insisted on a 50% to 50% ratio in financing and 45% to 55% in commissioning. In September, the government changed the profile of the programme, increasing the share of SPPs up to 37% of the total funding, but at the meeting on December 5 this order was declared invalid.

The next change in the ratio of investment between solar and wind power generation is taking place before the approval of localisation indicators and without taking into account the requirements for exports, which cannot but affect the confidence of investors, a representative of the Russian Association of Solar Energy Enterprises (unites manufacturers of equipment for solar power plants) told Kommersant. According to him, the particular nature of production processes in the solar energy industry does not allow for an incomplete loading of the line or its suspension. “At the same time, the envisaged investment resources will not ensure the work peak of half of the production facilities created in Russia, which currently exceed 700 MW per year, which, in turn, will weaken the industry’s position in foreign markets,” the Association stressed.

The Russia Renewable Energy Development Association explained to Kommersant that the issue of distributing the amount of support was put to the vote of the Association on September 20 and was supported by a majority vote in this proportion. The corresponding protocol was sent to the relevant ministries and became a part of the report in the government, they noted.