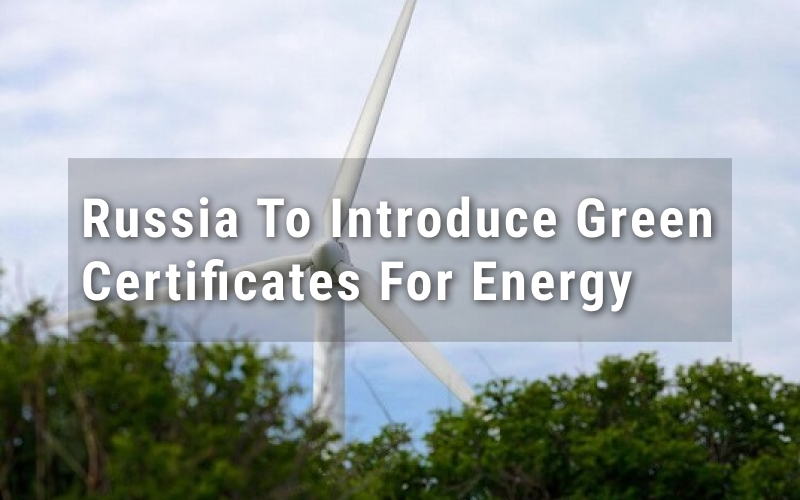 It is proposed to issue ‘green certificates’ for energy generated from renewable sources (at wind turbines, solar power plants etc.) in Russia. The draft plan for a law was posted on the portal for draft laws and regulations by the Ministry of Economic Development of the Russian Federation.

The Ministry sent in their document to the government on November 28, 2019. The Prime Minister Dmitry Medvedev had instructed to develop its concept at a meeting of the Foreign Investment Advisory Council which was held in October. The Ministry of Energy, the Market Council and the Ministry of Economic Development were involved in working out the draft law.

According to the draft, the ‘green certificate’ is an electronic record that confirms that the energy has been produced from renewable sources. The document would specify the amount of the energy produced in the period designated in the certificate.

The draft stipulates that power generating companies would be able to uncontrollably sell certificates before they expire. With the transfer of the green certificate to the purchaser, the rights certified by the purchaser are assigned in full. The ‘green certificate’ can be transferred either along with the sale of electric energy for which the certificate was issued, or independently of such sale.

According to the Kommersant newspaper, these certificates could be purchased by companies that deem it important to demonstrate that they use energy from renewable sources, among other things for their international image cultivation. The operators of solar and wind power plants, mini-hydro systems would be able to sell such documents.

The document would be issued at the request of the owner or other legal owner of a generating facility, and a relevant record would be made in a special register. The Russian government would establish the rules for issuing, handling, redemption and maintenance of the register of green certificates.

It is noted that the mechanism will be applied only to new RES-based generation facilities, i.e. the ones to be put into operation within the framework of the programme for support of renewable energy beyond 2024.

The Vedomosti newspaper also says that the certificate holder will be able to radiate information about the use of green energy supply to sustain an environmentally friendly image and mark the goods.

“We are going to further address a number of bottlenecks of the green certificates draft law, and its interrelation with the existing mechanisms of support for renewable energy over the next year,” the representative of the Ministry of Energy told Vedomosti.