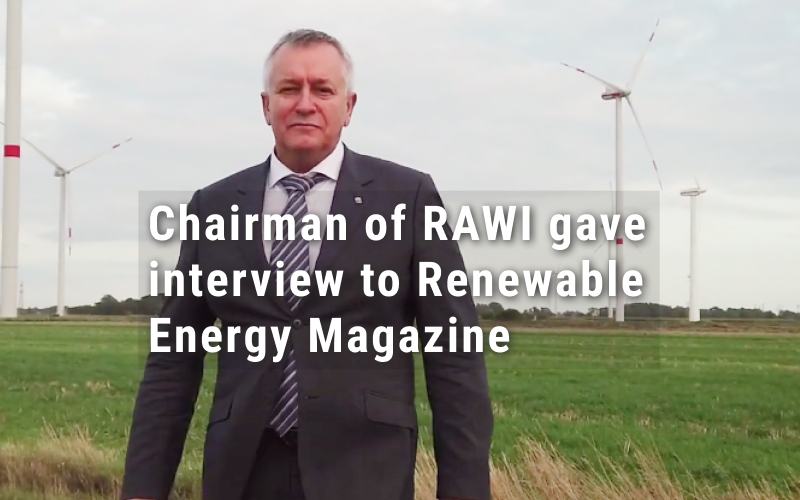 In February 2020, the Russian Association of Wind Power Industry (RAWI) will bring together professionals and representatives of all sectors of the wind power industry, both within Russia and from other countries around the world, in an industry Forum in Moscow. The programme for the event will include discussions of key topics, such as the localisation of wind turbine production, wind farm construction, new technologies, wholesale and retail markets, the development of wind energy systems in the Arctic region and other isolated areas, and other highly interesting topics.

The Forum will also include discussion among climatologists about climate change and the Paris Agreement, focusing particularly on the question of whether or not the installed renewable energy capacity in Russia is sufficient to meet the terms of the Agreement by Russia.

Renewable Energy Magazine (REM) first examined the Russian renewable energy industry in 2016, in an interview with Vyacheslav Solomin, CEO of EuroSibEnergo, Russia’s largest privately-held energy company. With the RAWI Forum due to take place next year, REM is pleased to revisit the subject, but this time focusing specifically on the Russian wind industry in a highly interesting conversation with Igor Bryzgunov, Chairman of the Management Board of RAWI.

Can you tell me more about RAWI and what it does?

RAWI stands for ‘Russian Association of Wind Power Industry’. The RAWI is a non-profit organisation independent of either government bodies or large corporations. Although being not-for-profit, it aims to help its members in their commercial activities by helping them find and take the right steps in the wind energy business. This is facilitated by the wide range of contacts of the RAWI managers and the synergy of having more than 150 members in the association. In short, we help our members to avoid fumbling around in the dark.

Members of the RAWI are the companies that cultivate the Russian wind energy market: Russian and foreign companies and flagmen of the industry, such as, for example, the Vestas, Siemens-Gamesa, Fortum, Enel, engineering companies, Russian power engineering companies and equipment manufacturers from Europe, development and construction contractors, logisticians and consultants, and crane companies. Of course, third level and secondary educational institutions that train personnel for wind energy.

Can you tell me more about wind energy in Russia and how the sector is doing over there?

Today, wind energy in Russia is a new, rapidly developing market. Legislation to support renewable energy in Russia appeared back in 2013, and the wind energy market ‘started’ in 2015. During this period, we have learnt not only to design and build wind farms, the construction market has formed an infrastructure of foreign and Russian companies. It is especially important that a new industry has been created in the country – the wind turbine manufacturing industry – thanks to one of the key requirements of the legislation to support RES, namely consistent achievement of high indicators, the 65 percent of localisation of generating equipment in the country. Various vendors have invested in the production of blades, towers, nacelles; Russian enterprises produce generators, transformers, inverters and other components for them.

Three vendors have localised their latest wind turbine developments in Russia (Vestas, Siemens-Gamesa Renewables), and the Netherlands-based Lagerwey turbines are localised by the Russian NovaWind, owned by Rosatom, and the towers are produced by Windar Renewables at their joint venture with RUSNANO and Severstal.

How many wind farms are there in Russia now and what capacity or percentage of Russian energy demand do they supply?

At the time of the launch of the first wind farms in 2017, 104 MW of wind farms were in operation in various regions of Russia. These were mainly turbines with a long service life history. Today in Russia there are 190 MW of wind farms in operation, which is less than 1 percent of the total energy balance of Russia, but this year more than 400 MW is under construction; we plan to commission from 200 to 700 MW annually, and 3,380 MW of wind farms will be built by 2024. We have every reason to expect an extension of the support programme beyond 2024, now its main parameters are being adjusted to take into account the achieved localisation indicators and reduction of capital expenditures.

Are these mainly onshore wind or is Russia starting to develop offshore wind as well?

All wind farms operating and under construction in Russia today are onshore. Opportunities for the development of offshore wind energy are being discussed today by market participants, and we invite foreign investors and technology partners to form a group of interested parties.

What role does the Russian government play currently in promoting Russian wind power and driving it forward?

The key one. The state has formed legislative support for RES, which stimulates wind power. This support model, as recently recognised by European experts, has proved to be the best of the existing models, as it stimulated not only the construction of wind farms, but also the production of wind turbines and reduction of marginal capital costs, and thus the cost of electricity produced. According to this model, each new wind farm receives an annual guaranteed return of 12 percent for 15 years, which is a lot of money in the energy business, as well as in the investment, it must be said. Investing in the wind energy industry in Russia today is very profitable, and those who understand it will control a huge market in the future.

Is it mainly Russian companies that are building wind farms in the country or does the industry collaborate with other companies from around the world?

Undoubtedly, the role of foreign companies with experience in designing and building wind farms is very solid. After all, Russian companies had no experience in designing and building wind farms. European colleagues create joint ventures with Russian companies and successfully cooperate with them. After all, the Russian technical regulation in the design and construction of wind farms is more complicated than, for example, the European one.

How attractive is wind power, and renewable energy generally, to the Russian population?

In Russia, people are interested in everything new and progressive. The concept of clean generation finds receptive audience, especially among young people. In those regions where the wind farms are being built, they have become the object of attention of the entire population, and the constructed wind farms immediately became the objects of excursions and traditional events. For instance, newly-married people in Ulyanovsk fancy coming to the local wind farms during the wedding ceremony. Surely, sometimes we have to face a lack of information among people about the environmental neutrality of wind turbines, but modern Internet media go to the rescue of us in our explanatory work.

Is Russia investing in energy storage as a means of supporting wind and to what other degree?

Electricity storage systems will significantly expand the scope of application of RES-based systems, and that makes sense for us in Russia. As far as I’m aware, three large state corporations are working on the development of high-capacity and relatively inexpensive storage systems, which will be able to coact with RES equipment. So far, such systems are based on the equipment available on the market. I don’t know the figures, but as we know, Russia is a huge country and hybrid RES systems with batteries are being used more and more widely and their prospective market is huge. Such systems are already in operation in the east of the country, in the north and northwest of Russia.

One should have their wits about everything; revolutions have never brought prosperity, and this is what our country is most convinced of. I’m not afraid of looking like I’m behind the curve, but the matter of renewable energy development in Russia at this stage is, first of all, the matter of development of new generation technologies or, as you wish, ‘buying a ticket for the last departing train, instead of trying and catching up with it later on’. It is known that over the past two years, the amount of capital expenditures at tenders for wind energy projects has more than halved. But it should also be taken into account that fossil energy sources in our country provide a third of export revenues and before we talk about their displacement, which can seriously affect the economy of the country, it is necessary to develop technologies for their deeper processing, the products of which should give the same economic effect. Russia’s contribution in decarbonisation and the fight against CO2 emissions comes with its territory. Forests in Russia cover 7,187 thousand square kilometres, which is more than 60 percent of the country’s territory.

What do you expect the Russian renewable energy sector to look like in say ten years’ time?

I prefer to keep within the wind energy technology, as it is my area of professional interest. In the next five years, the wholesale wind energy market in Russia will be finally formed and strengthened, and the retail market will be launched, which has great potential in Russia; the same true for the direct contracting market, which is equally large-scale. In the period through to 2030, the offshore market will develop and strengthen, based on the demand for the development of the northern sea territories. Around the same period, grid parity with traditional energy will be achieved, and wind energy systems will get a new impetus for development, competing with conventional and hydrocarbon energy sources.

Chairman of the Management Board of the Russian Association of Wind Power Industry (RAWI), Igor Bryzgunov  has extensive experience in numerous areas of the wind energy business, from design and production of wind turbines to development of wind farms and considerable expertise in the localisation of multi-megawatt wind turbine component production. Bryzgunov is also an expert in the Russian RES market and holder of a broad network of ties in specialised government agencies, corporations and associations.