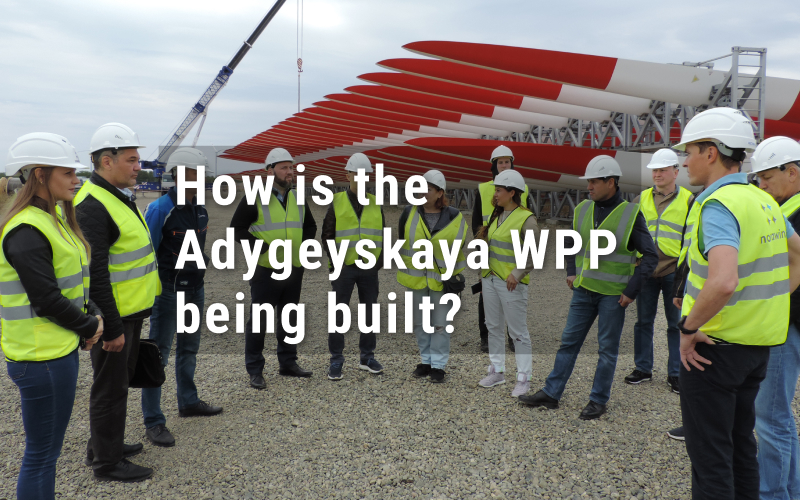 Within the framework of the study trip the delegation of RAWI headed by the Chairman Igor Bryzgunov visited the construction site of Adygeyskaya Wind Power Plant last Friday, September 20, 2019.

This is the first pilot project of NovaWind, JSC (Rosatom Group) with a total capacity of 150 MW, which is being implemented in the Shovgenovsky and Giaginsky districts of the Republic of Adygea of the Russian Federation.

Andrey Nesteruk, Deputy Director General for Life Cycle of Wind Farms at NovaWind, gave a tour of the construction site of the Adygeyskaya WPP.

The delegation visited several WPP construction facilities. The visit began with a special storage site where components of wind turbines (WT) are temporarily stored. Later on, they are transported for preassembly to the sites located in the vicinity of the wind farm.

Giant blades, 50 meters long and weighing 12 tons, are produced in India, they are transported to Russia by sea and then delivered to the site by special tractor-trailer units.

The wind turbine tower (pretty much like a construction toy set), consists of 8 metal sections. Seven of them are assembled from separate fragments directly on the sites, and the eighth section, to which the nacelle is attached, features a one-piece design.

An interesting feature of the design of these wind turbines (developed by Lagerwey, NovaWind’s technology partner) is that the direct drive turbine does not require a shaft and gearbox. In fact, it’s one big generator, which is turned by the blades directly.

The top of the turbine is placed on the nacelle frame, and then goes the hub to which the blades are attached; and the entire unit is attached to the tower in parts.

The participants of the delegation saw for themselves the process of installation of a wind turbine. Sarens construction crane (the member of the RAWI) weighing 550 tons assisted by an additional truck crane lifted the core of the wind turbine, a generator weighing 54 tons.

On behalf of RAWI and the participants of the trip, we thank the team of NovaWind, JSC and its Deputy Director General for Life Cycle of Wind Farms Andrey Nesteruk for the excellent excursion and the opportunity to get acquainted with the technological peculiarities of WPP construction.

By 2023, NovaWind will have created 1 GW of 3 wind farms located in the Republic of Adygea, Stavropol Krai and Rostov Oblast, as well as set up production of main wind turbine components. And we wish success in solving ambitious tasks to this professional team!