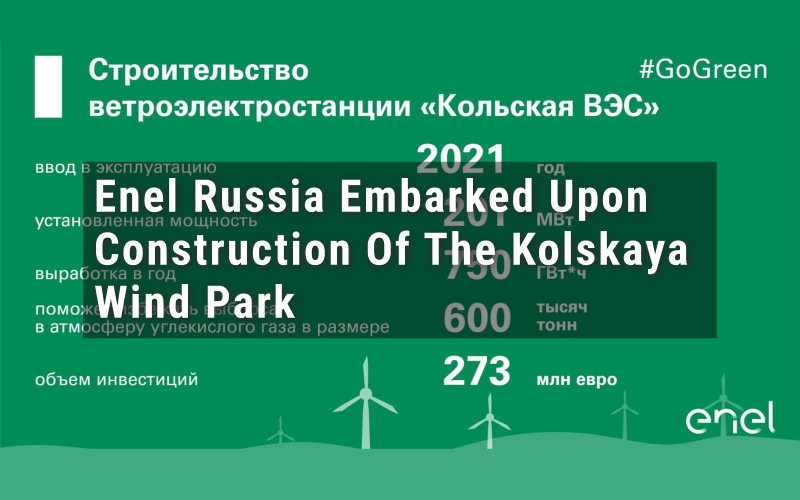 Construction of the Kolskaya WPP, a wind farm of PJSC Enel Russia located in the Murmansk Oblast, has started. With an installed capacity of 201 MW, it is currently the largest wind farm under construction beyond the Arctic Circle. The construction will be carried out by Enel Green Power, a subdivision of Enel Group responsible for the development, construction and operation of renewable energy facilities worldwide.

The total amount of Enel Russia’s investments in the Kolskaya WPP will amount to about 273 million euros.

“We are starting to implement our strategic wind farm construction project in the presence of the Murmansk Oblast management and the Board of Directors of Enel Russia, a meeting of which was held today in Murmansk, emphasizing the particular importance attached to this project. With the start of construction of this facility, we reaffirm our commitment to Russia’s energy transition to a low-carbon economy. This wind park, which is the first major renewable energy facility located beyond the Arctic Circle, will help diversify the energy profile of the Murmansk Oblast by using its abundance of wind resources. In the future, we will continue to implement projects that contribute to the energy transition, following the goal of complete decarbonisation of Enel Group’s activities by 2050.”

– Simone Mori, Head of Europe and Euro-Mediterranean Affairs of the Enel Group

“We are proud to announce the expansion of our company’s presence beyond the Arctic Circle with environmentally friendly technologies such as wind power generation. Based on the widely recognized experience of Enel Group, we contribute to the emergence of wind power generation facilities in areas with difficult climatic and weather conditions. Innovativeness combined with the stable characteristics of the project is intended to contribute to the development of the economy of the Murmansk Oblast and at the same time to contribute to the country’s energy mix by generating emission-free energy “.

“The Murmansk Oblast is a strategic region from various points of view, including industrial ones. The energy security of the polar region is vitally important not only for us, but for the country as a whole, especially in the context of the large infrastructure construction projects we are currently carrying out. The wind park being created is another additional level of ensuring such security, and due to the use of extensive wind potential – this one thing’s for certain – we always have enough wind. In addition, our goal is to turn the Murmansk Oblast into a truly advanced region, and in this sense, the use of the most advanced technologies and the most relevant trends, such as green energy, is a direct step towards its achievement.”

Enel Russia received the right to build the 201MW Kolskaya WPP as part of the tender held by the Russian Government in 2017 for the construction of wind power facilities with a total installed capacity of 1.9 GW. At the same time, the company received the right to build the 90MW Azovskaya WPP. Its corner stone has already been laid and the plant is slated to be commissioned at the end of 2020.

Enel Russia was granted the right to implement another wind energy project in June 2019, the Rodnikovsky wind farm with a capacity of more than 71 MW located in the Stavropol Krai. Its commissioning is scheduled for the first half of 2024. Enel Green Power is responsible for the development and construction of all the projects.

Enel Russia’s total investment in the three wind farms will amount to about 495 million euros, which underlines the company’s clear desire to diversify its generation portfolio using zero emission technologies. These investments are in line with Enel Group’s goal to fully decarbonise its assets by 2050.

Commissioning of the Kolskaya WPP is scheduled for the end of 2021. The wind farm will be able to produce about 750 GWh per year, preventing the emission of about 600,000 tons of carbon dioxide into the atmosphere. The wind park is slated to be equipped with 57 turbines and located on a total area of 257 hectares.

The Enel Russia project in the Murmansk Oblast is being implemented within the framework of the cooperation agreement on the development of renewable energy sources signed with the regional government in November 2018. This agreement is aimed at increasing the economic potential of the Murmansk Oblast through the introduction of new methods of electricity generation and creation of energy infrastructure facilities.

Starting from 2013, the Government of the Russian Federation holds annual tenders for investment projects based on renewable energy sources in order to increase the share of energy generated by RES to 4.5% and to create RES facilities with a total installed capacity of 5.5 GW by 2024.