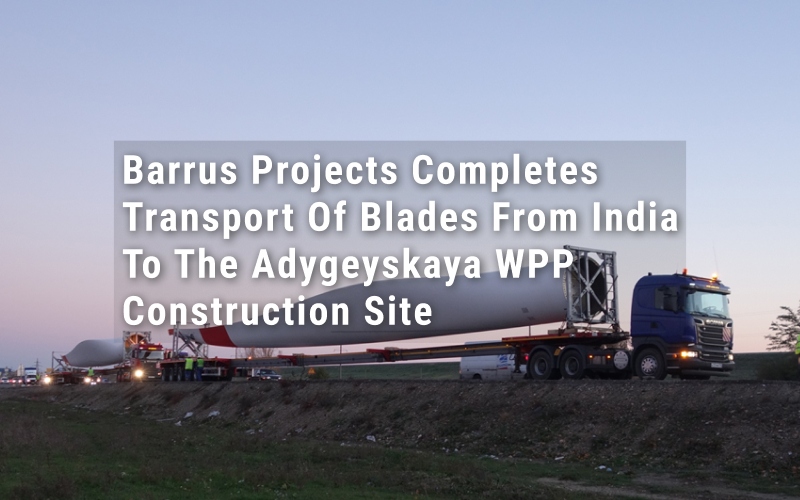 As part of the Adygeyskaya WPP construction project (being built by the NovaWind, JSC), the Russian and Indian project groups of the Barrus Group of Companies (Member of RAWI) successfully completed a set of works on transportation of the full range of the blades (60 sets or 180 units of blades) from the city of Bangalore, India, to the port of Novorossiysk including customs clearance of the blades, followed by road transportation to the first in the South Federal District of the Russian Federation wind farm construction site. The distance from Novorossiysk to theWPP construction site is 280 km.

In addition to the blades, the Barrus Group of Companies also delivered 14 wind turbines with a total weight of 5838.8 tons to the Adygeyskaya WPP. The wind turbines were shipped to the port of Rotterdam including intra-port transporation, and then were transported by sea to the port of Novorossiysk/Saint-Petersburg with subsequent ground transportation from the port to the construction site of Adygeyskaya WPP.

Punctual delivery of one of the most complicated components of wind turbines by the Barrus. Proyektnaya Logistika, LLC company’s own rolling stock, namely specialized Volvo FH-truck 6×4, Scania R500 CA 6X4 tractor units, Faymonville, Nooteboom extension type low loaders, as well as highly qualified operators allowed our customer to start the installation of the wind turbines at the site of Adygeyskaya WPP.