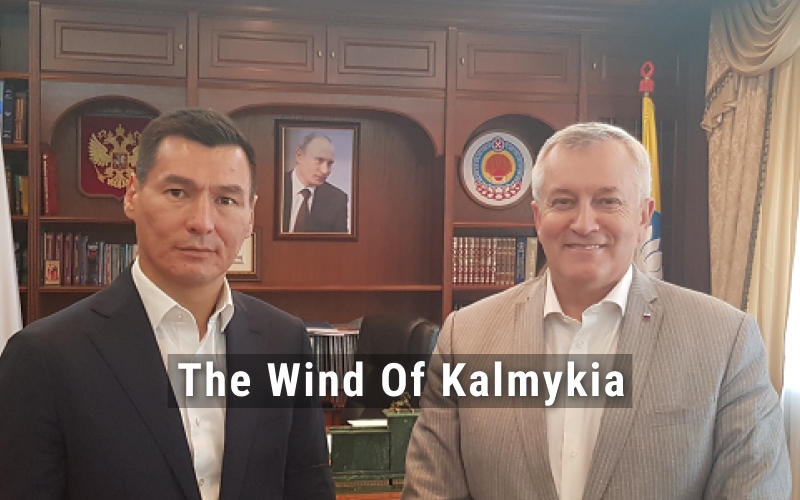 On August 16, the business meeting of the Acting Head of the Republic of Kalmykia Batu Khasikov and the Chairman of the Russian Association of Wind Power Industry Igor Bryzgunov took place in Elista (the capital city of the Republic). The meeting focused on the prospects of wind power industry development in Kalmykia, potentiality of attraction the specialized investors to the region and motivational mechanisms to create their own production of equipment and power generation facilities.

It is well known that the new acting President of the Republic inherited an economy with many economic and social woes. The vast territory is poorly supplied with water, the republic has a significant energy deficit, worn-out networks, lack of jobs. But the new team of the Government of the Republic led by their head is eager to solve all these difficult tasks. Wind power engineers know that Kalmykia has a great wind potential and impressive territory, which is convenient for the construction of wind farms, as well as vast areas with excellent logistics, which is convenient for the creation of wind turbine production.

Starting from the 1990s, several attempts were made to create own windpower-based generation in the Republic, which did not give a systemic result: investors either made technical mistakes or did not have sufficient financial capacity to build the planned projects.

In addition, the energy sector networks structure is 70% worn out, and the current legislation governing the sale of electricity does not allow for the creation of large-scale electricity generation, which would cope with the problem of energy shortages. Wind energy market participants perceive the situation in the Republic as a challenge. Currently, construction of large wind power plants is planned in Kalmykia: in accordance with the agreement of September 2018, Vetroenergetika, the Management Company plans to build 450 MW of wind farms by 2021, and 15 MW of wind power plants will be built by VES Breeze, LLC.

The cooperation of the participants of the wind energy market, members of the Russian Association of Wind Power Industry (RAWI) and the Government of the Republic of Kalmykia will help to create not only new wind farms in the Republic, but also new industrial sites for the production of wind turbines and their components.