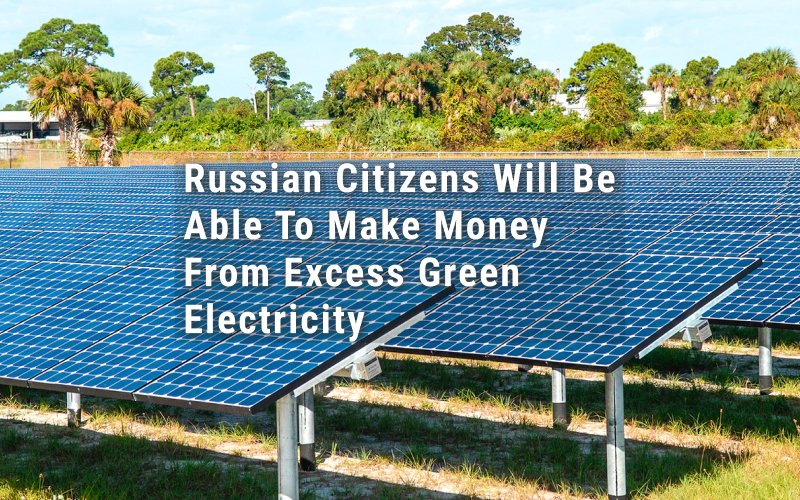 Owners of solar, wind or water energy units that generate up to 15 kW of electricity may be exempted from personal income tax when selling surplus to grid companies. The relevant draft law was approved for submission to the State Duma at a meeting of the Government on August 15. And the document, which allows the owners of small wind turbines and solar panels to deal in electricity, is being prepared for the second reading. MPs are expected to consider it in the autumn session.

To each single-family home their own wind turbine

The population’s demand for electricity threatens to outpace the newly connected capacities. Experts warn that in seven years, the resource of 35 thousand MW commissioned in Russia over the last 10 years may be depleted. So Russia needs at least 15% of green energy in the total generation, the experts believe. The way out can be both the construction of large facilities and the emergence of personal sources of alternative energy for the population.

In February, the State Duma approved in the first reading the bill introduced by the Ministry of Energy within the framework of the programme for the development of renewable energy sources (RES). The document, among other things, provides that individuals with energy units with a capacity of up to and including 15 kW, based on RES, will be able to sell the generated electricity in the retail markets.

Pavel Zavalny, Chairman of the State Duma Committee on Energy, explained to the Parlamentskaya Gaseta (PG) title that due to this “every citizen will have the right to install a solar panel or a wind turbine on their own house.

Public utilities and generating companies will operate separately. The law will give people the right to produce electricity themselves. Moreover, if there is an excess of electricity, they will be able to supply it to the grid. The grid companies will be obliged to buy this electricity at market price,” he explained.

Private energy generation will make the people of the North secure

Ensuring stable electricity supply to residents of remote regions of Siberia and the Far East has always been a critical task. However, for this purpose it is necessary to stretch the power transmission line for hundreds of kilometres. Where this is not possible, thousands of tons of fuel oil have to be delivered via water, and the process is complicated by the fact that the navigation period is limited. There are examples of power generation isolated from the rest of the country, the Bilibino NPP in Chukotka and its would-be successor, the floating Lomonosov NPP, for which the coastal infrastructure is already under construction.

At the same time, remote regions have great potential for renewables, especially wind energy and partly solar energy. Tiksi (urban locality), for example, has begun construction of a wind farm that will be able to supply one of the most important ports on the Northern Sea Route, which has been cut off from the country’s energy system. But if the settlement as a whole can have an independent green generation, why can’t its residents organize autonomous energy sources to use the climatic difficulties as an advantage, namely the sea arctic wind and polar night?

If every resident of remote regions can legally have their own power generation, they will feel safer,” said Igor Ananskikh, First deputy Chairman of the State Duma Committee on Energy, to the PG. “The main task of the law on microgeneration under consideration is to allow the use of green energy in the form of wind turbines and solar panels in hard-to-reach areas,” the Duma member explained.

He also noted that, although small renewables-based units are now “expensive” in Russia, as all green energy in general, nevertheless, the privately owned solar panels have become “one of the most efficient in the world”.

“I think that this law will stimulate the production of Russian energy units for small generation, solar panels and others”, the Duma member expresses his hope.

However, even in Russian regions with developed power grids, there are “blank spots” that make it unprofitable for large companies to erect power lines. Therefore, the law under consideration, according to Ananskikh, may solve this problem as well.

He also added that the draft law does not concern cities and multi-family residential houses, as there is already a special legal order in place. “Where the infrastructure is sufficient, the generating organization under the existing legislation is obliged to supply and bring 15 kW for a small amount of money to each consumer, which is much more profitable,” he stated.

Where it is not profitable to ensure gas or electricity supply, 15 kilowatts of your own for personal use is much more profitable.

At the same time, in his opinion, it will be necessary to adjust the permitted value for personal generation for private houses in the future. “In the future, we need to think about increasing the permitted capacity for small-scale generation. If the house is big, 15 kW may not be enough,” says Ananskikh.

This opinion is shared by Valery Gartung, First deputy of the State Duma Committee on Economic Policy, Industry, Innovative Development and Entrepreneurship.

“We need to expand the area of validity of the law. Even for private individuals, 15 kW is the minimum. If there is a sizeable house, most certainly 50, 60 or even 100 kW may be needed then. As a first step, we can settle upon 15 kW. In a year’s time, we should raise it to 100 kW,” Gartung said in a comment for the PG.

To reduce prices and demonopolize the electricity market

Further increase of the permitted threshold for microgeneration implies another goal, demonopolization and decentralization of the Russian power industry in the future, said Gartung. He noted that for this purpose, it is necessary to generally develop small generation, and not only based on alternative energy sources, but also for personal needs of individuals. “Small businesses should be given the opportunity to develop sources of small generation so that they also have quite simple and understandable conditions for selling surplus energy and supplying it to the grid,” he said.

The Duma member explained that thus, in the long run, the efficiency of electricity production and consumption may increase.

“Then we would decentralize the sources of generation, and in fact our business, the consumer, would be able to balance supply and demand. At the production site, we have different workloads within 24 hours. Even in the continuous cycle, many companies have the main load in the first shift, and in the second and third shifts, it is reduced. At the same time, citizens have a greater need for electricity mainly in the evening. So there are morning and evening consumption peaks. And this could be smoothed out by small power generation,” said Gartung.

The Duma member complained that the grid companies put up a “stiff” resistance to such proposals, as it is unprofitable for them to have a presence of small generation in the market, because “small generation will make the market more demonopolized and decentralize it”. But, he noted, the latter is just beneficial to citizens, consumers and the state, as it will reduce the cost of transmission, which is from a third to a half of the price, and eventually reduce the cost of energy.

However, Gartung is sure that the law introduced in its current form is “more symbolic”, it is “the first step in the right direction, but clearly insufficient”. “On the other hand, this law is important as a precedent. It will allow working out the mechanisms of interaction of private small generation with grid operators, will open up the drawbacks and obstacles, and, upon their description, it will be possible to improve the scheme and eliminate the drawbacks. And only then we are able to raise the threshold value of generation,” the Duma member concluded.

Green energy within or outside Russia

The mankind is actively changing over to the use of the renewables against the background of the threat of exhaustion of fossil fuels and negative consequences of their use for the environment. In general, the increase in renewable energy installed capacity is already ahead of traditional sources; since 2015, it is responsible for 55% of the total increase. 47 countries plan to switch to 100% green energy by the middle of the century, and China, Brazil, Japan and Canada announced the goals to achieve 30% of generation based on the renewables by 2030.

Only wind power plants alone around the world already produce more than the entire Russian energy sector. One of the brightest examples of wind energy use is Denmark, where wind generates more than 40% of the power.

Currently, the leader in the use of RES in general is China, both wind and solar (almost 26% of generation). In the USA, for comparison: 21%. Countries such as Germany, Spain and India are also in the lead.

In Russia, where the use of renewable energy sources currently does not exceed one percent, despite the huge reserves of hydrocarbons and other fossil fuels, there is great potential for the development of green energy. The Kislogubskaya tidal power plant has been in operation since the Soviet period, and a number of other capacities, geothermal, solar and wind power plants as well. Since the 2010s, projects to build wind farms in the Rostov Oblast, Adygeya and other regions have been reinvigorated.