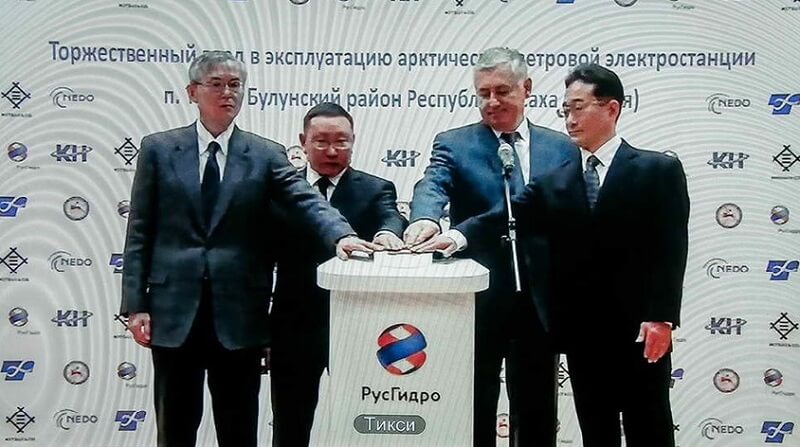 On November 7, in the Arctic village of Tiksi in the Republic of Sakha (Yakutia), RusHydro commissioned a unique 900 kW wind power plant.

The launch ceremony was attended by Chairman of the Board, General Director of RusHydro PJSC Nikolay Shulginov, head of the Sakha Republic (Yakutia) Aisen Nikolaev, executive director of the Japanese organization NEDO Takashi Omote, representatives of the Japanese companies Takako Toko and Mitsui.

The launch command was given by the Chairman of the Board, General Director of RusHydro PJSC Nikolay Shulginov. The plant began to produce clean electricity for the isolated polar village of Tiksi, which now has over 4,600 people. The operation of a wind power plant increases the reliability of Tiksi’s energy supply and reduces the consumption of expensive imported diesel fuel by the Bulunsky Ulus of Yakutia. Diesel fuel savings are estimated of up to 500 tons per year.

Three unique wind turbines are made in the Arctic design for work in the harsh conditions of the the Subarctic. Wind turbines are able to operate at temperatures up to –50 ºC and can withstand wind speeds of up to 70 m/s. The height of each of the three wind turbines is 41.5 m, the blade diameter is 33 m. The equipment is manufactured by the Japanese company Komaihaltek.

“We hope that the equipment will work reliably in the harsh climatic conditions of Tiksi and will confirm its performance”, – Nikolai Shulginov said at the launch ceremony. After testing this unique technology, RusHydro will be ready to consider options for localizing equipment production in Russia and the possibility of replicating technology in energy-isolated areas of the Far East. “The launch of a wind-diesel complex in Tiksi is an example of effective international cooperation on the introduction of innovative technologies in the Russian power industry”, – said the head of RusHydro.

This year, the companies of the RusHydro Group will begin work on the construction of a diesel power plat equipped with three generators with a total capacity of 3 MW and an energy storage system. Then, the wind farm, diesel power station and power storage system will be combined into a single energy complex with an automated system for the production and distribution of energy. The power of the wind-diesel complex (VDK) will total 3.9 MW. The power plant will be operated by Sakhaenergo JSC (a subsidiary of Yakutskenergo PJSC, a member of the RusHydro Group).

“Implementation of the project of the Arctic wind-diesel complex is very important for the Republic. I am confident that Japanese engineers and workers of RusHydro will be able to implement this large project that will help improve the quality of life of the residents of Tiksi village living in one of the most extreme climatic conditions of our planet”, – said Yakutia’s leader Aisen Nikolayev.

Following the launch ceremony, the heads of RusHydro PJSC, Sakhaenergo JSC and the Republic of Sakha (Yakutia) signed an agreement providing, among other things, for the tariff decisions annually approved by the Government of the Republic for the construction and operation of the Tiksi wind-diesel complex.

The VDK construction project was launched in September 2017 as part of the Eastern Economic Forum, when RusHydro, the Government of the Sakha Republic (Yakutia) and the Government of Japan’s New Energy and Industrial Technology Development Organization (NEDO) signed an agreement to build a Tiksi wind diesel complex.. Immediately after the documents were signed, design work began, and they began to prepare the site in the village.

As far back as in May 2018, a vessel carrying three wind turbines arrived from Japan to Vladivostok. The equipment, weighing almost 240 tons, was delivered to Yakutsk by 18 specialized vehicles. In the port of Yakutsk, wind turbines overloaded onto a river vessel and delivered to Tiksi along the Lena River. In total, the journey from Vladivostok to Tiksi took 4.7 thousand kilometers, the journey time was 18 days. It took three additional months for the equipment to be assembled and prepared for operation.

Source: Energy and Industry of Russia