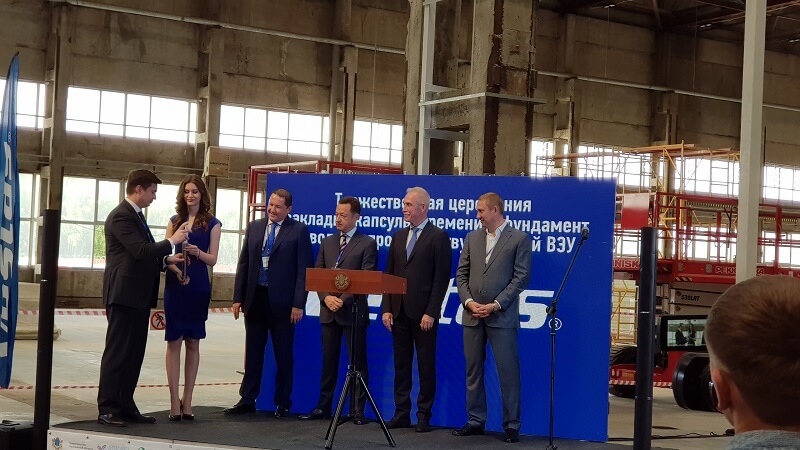 A solemn ceremony to lay a time capsule was held at the construction site of the Vestas wind turbine (WT) blades  manufacturing plant In Ulyanovsk. The event was attended by the Governor of the Ulyanovsk Oblast Sergey Morozov, Deputy Head of the Venture Capital Investment Division of the Rusnano Management Company LLC Alisher Kalanov, Managing Director of Vestas Russia Kimal Yusupov, General Director of Fortum Alexander Chuvaev and the Chairman of the Board of Directors of the Ulyanovsk Oblast Development Corporation and ULNANOTECH Dmitry Ryabov.

In the Ulyanovsk Oblast, Vestas Manufacturing Rus is localising production of composite WT blades, which have no analogues in Russia. The installed capacity of power equipment will be 3.6 MW with the possibility of increasing to 4.2 MW. The project is partnered by Vestas, RUSNANO and the Consortium of Investors of Ulyanovsk Oblast, of which Ulyanovsk Nanocenter ULNANOTECH is a part. Investments will exceed RUB 1 billion and will create over 200 new high-tech jobs for residents of the region. The annual output will amount to approximately 300 WT blades.

The Vestas production site is located on the territory of the aviation cluster in Ulyanovsk. Construction works are carried out by Ulyanovsk company DARS in accordance with the established terms of the project. About 60% of the planned activities have already been completed. Release of the first blades of the windmill will begin in early 2019.

The Vestas production site is located on the territory of the aviation cluster in Ulyanovsk. Construction works are carried out by the Ulyanovsk company DARS according to the established project terms. About 60% of the planned activities have already been completed. Production of the first wind turbine blades will launch in early 2019.

The unique production of the WT components is being created within the framework of a special investment contract between Vestas Manufacturing Rus, the Ministry of Industry and Trade of the Russian Federation and the Ulyanovsk Oblast. Special investment contract, concluded for a period of 8 years, is the first of this kind in the national power engineering industry.

Danish-based Vestas, the world leader in the production of WT, together with RUSNANO, is transferring wind power technologies and increases its production facilities in Russia. The blades production in Ulyanovsk will be one of the key stages in the localization strategy of wind power equipment in Russia. In May 2018, Vestas has already launched the production of WT nacelles in the Nizhny Novgorod Oblast. Vestas has been chosen as the supplier of wind power equipment for the Wind Development Investment Fund (established by RUSNANO and Fortum on a basis of parity) which implements wind farm construction projects with a total capacity exceeding 1,800 MW.

Alisher Kalanov, Rusnano Deputy Head of the Venture Capital Investment Division (RES): “All the necessary conditions for the development of the wind power industry are being formed in the Ulyanovsk Oblast. The construction of a plant for the production of equipment is in the completion phase, the country’s first wind park has already been built, the construction of a second wind park with a capacity of 50 MW is in full blast, and a new University Department for training specialists in the wind power sector has been set up. In addition to the blades, our localization program with Vestas provides for the production of WT towers in Russia, which will ensure compliance with the level of localization of renewable energy facilities requirements in the wholesale market.”

“Vestas team is very proud of the successful promotion of such a large investment project in Russia. In addition to the infrastructural investments, the plant will create sustainable high-tech jobs in Ulyanovsk upon completion of construction works. In general, the localization project of wind power plants in Russia will allow our country not merely develop renewable energy, but also create new promising areas for domestic power engineering.”

Sergei Morozov, the Governor of the Ulyanovsk Oblast: “We are witnessing unique events taking place in the Oblast! We have four years of hard work lived through and there are results that we are proud of: a 35 MW wind farm is already built and gives energy to the Oblast’s general energy network, the construction of the second facility is already underway, our youngsters are studying in a specialized center, and very soon the production of equipment for wind farms will start. We have done a lot, and our plans are to do at least a few more wind farms and new projects for the development of this industry. I am sure, with such partners as we have, all the goals are achievable.”