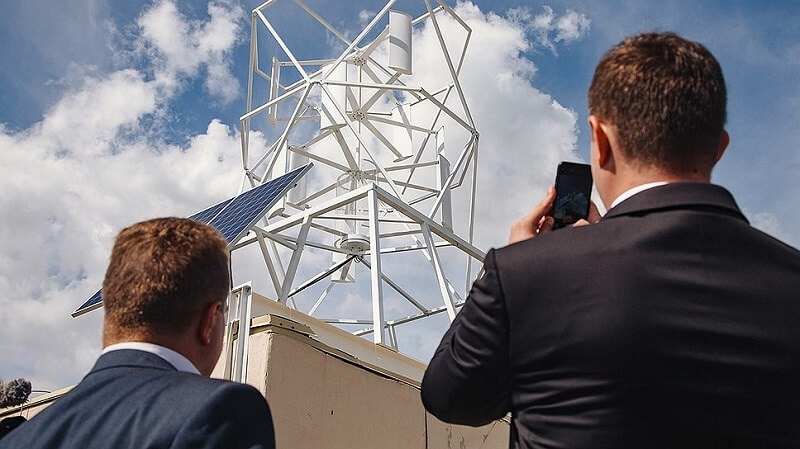 The Izhevsk-based company plans to export its own wind turbines. The SEGZ-Electromash design bureau has launched a batch production of wind turbines with renewable energy sources. The company plans to reach production volumes of 100 units per year in 2019 and moreover — arrange export. To date, three turbines have already been shipped to the European customer. The regional government will consider implementing the local product in public sector institutions and sports facilities. The Russian Association of Wind Power Industry believes that the Udmurt company can succeed on the domestic and foreign markets through an established system of relations with customers.

The SEGZ-Electromash design bureau has set up a batch production of wind turbines that provide power to remote and mobile objects where there is no access to a fixed facilities. “Our product and wind turbine is an accumulative station. It is not connected to any network resource, but instead uses wind and solar power in the batteries,” – said Dmitry Krutikov, CEO of SEGZ-Electromash Design bureau LLC. 200 million rubles were invested in the project. According to Mr. Krutikov, the short-term plan for the production of units in 2019 is 100 pieces per year. According to calculations of “Kommersant Udmurtia”, the declared volumes will allow to recoup investments. “Having achieved that, we plan to reach the level of large-scale production. We count on the demand of agricultural enterprises, command posts of the defense-industrial sector, as well as remote infrastructure facilities in the Russian borderland,” – the company’s CEO added.

Electromash Design Bureau LLC was registered in 2013. The company develops electric motor machinery, various mechanism control systems, power electronics. Mobile wind turbines with capacity from 0.5 to 15 kW, being developed by the company, come under notion of quickly eractable accumulative stations and are used for power supply of remote and mobile objects. These structures are designed to convert in and accumulate the electric power from sun and wind energy. According to SPARK-Interfax (Russian reference group), the company’s revenue amounted to 9.5 million rubles, net profit is 3.8 million rubles, net worth is 136.51 million rubles.

The local company counts on the export potential of its wind power generators. According to Dmitry Krutikov, Serbian companies, countries of the European Union and the Middle East have already showed  interest in Izhevsk-based company products. The SEGZ – Electromash design bureau has concluded a dealer agreement with a company in one of the European countries. Among other things, three wind turbines were shipped to the customer. “There are several more agreements with foreign partners which are at the stage of conclusion now,” – Dmitry Krutikov added.

The cost of one unit is 250 thousand rubles, including VAT. Competitors of the Udmurt company in the domestic market are headquarted in Omsk, Moscow, Chelyabinsk, Volzhsk. The foreign competitors include Windside (Finland), Typmar (China), WindGenerator (China), TurbinaEnergy (Germany). On average, prices for a wind turbine vary from 100 thousand to 3 million rubles depending on its capacity.

First Deputy Prime Minister of Udmurtia Alexander Svinin described the Russian wind power market as promising. “The Russian Minister of Energy predicts that by 2024, up to 20% of power would be produced from renewable sources in Russia. Today, only 0.1% of power in Russia are produced from of wind and sun energy,” – Mr. Svinin said. According to him, the regional government is ready to support the local producer. “We will think how to integrate these products into budget-funded entities and in the sports facilities that we are building today. Because the connection costs are really big, and through this we can save up to 40 times the cost of 1 kWh due to the turbines that are being produced in Izhevsk,” – Mr. Svinin said.

Chairman of the Russian Association of Wind Power Industry (RAWI) Igor Bryzgunov in an interview with “Kommersant Udmurtia” said that, globally, the export potential of hybrid systems with a renewable energy source for the power supply of isolated facilities is great. “But this is a very complex market. Abroad, there is an established list of such equipment suppliers. Now, the Chinese companies behave aggressively. But many of them stuck to the “sell-and-forget” strategy which is a disgrace for the very idea of ​​using renewable energy systems for power supply. Therefore, a well-established system of relations with customers, both potential and successful, will be the main key to the success of the Udmurt company,” – Mr. Bryzgunov believes. The interlocutor noted the rise in the production of power supply systems on renewable energy sources in Russia. “Competitive barriers will only be growing, but the race is got by running. In this case, reputation goes before the supplier and it’s not easy to earn and it takes a lot of time. The main factors of success are reliability, ease of operation and maintainability, as well as well-established customer support, which is sometimes more important than the technical parameters of the system itself,” – the expert concluded.