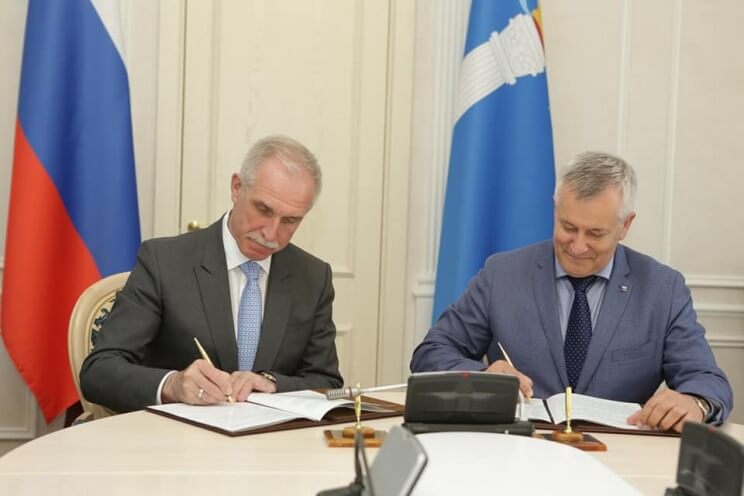 May 16, 2017. In Ulyanovsk, an agreement on cooperation between the Government of the Ulyanovsk region and the Russian Association of Wind Power Industry (RAWI) was signed. The agreement provides for the involvement of industry investors, materials and equipment manufacturers and service providers in the region. A separate article of the agreement provides for the creation of a national wind power exhibition – ARWE Expo – in the region, the operator of which is ‘Elektrifikatsiya’ JSC. The exhibition will be held annually in the Ulyanovsk region.

According to Sergey Morozov, cooperation with RAWI will allow to more widely represent the region in the wind power market. “[We] signed an agreement on cooperation with the Russian Association of Wind Power Industry. Partnership with this authoritative organization will allow our region to strengthen its positions in this market, to integrate enterprises, which enter the industrial cluster that is being created in the territory of the Ulyanovsk region, into it.

We plan to create a platform on the region’s soil that will attract players of this market. Those are the investors and manufacturers of components needed for this industry, and equipment buyers, all those who are interested in the development of this field. Our cooperation will allow us to more widely represent the Ulyanovsk region in the wind energy market.”

The Ulyanovsk region is becoming the most active region in the wind power development in Russia. The leading companies operating in the region, the leaders of global and Russian wind power, namely Vestas, Fortum, Rusnano, have created a new industry in the region with the support of the Governor of the Ulyanovsk region. Today, the number of such companies has surpassed 20. These are both suppliers of materials and equipment for wind energy, construction, logistics and design companies and many others. Most of these companies have chosen the Russian Association of the Wind Power Industry as their institutional body, which is an appreciation of the RAWI effectiveness.

‘We consider the signing of the agreement with Sergey Morozov, the Governor of the Ulyanovsk region, as a vote of confidence and the possibility of expanding the association’s activities to attract investors and suppliers of materials and equipment to the region,’ noted Igor Bryzgunov, the Chairman of the RAWI.