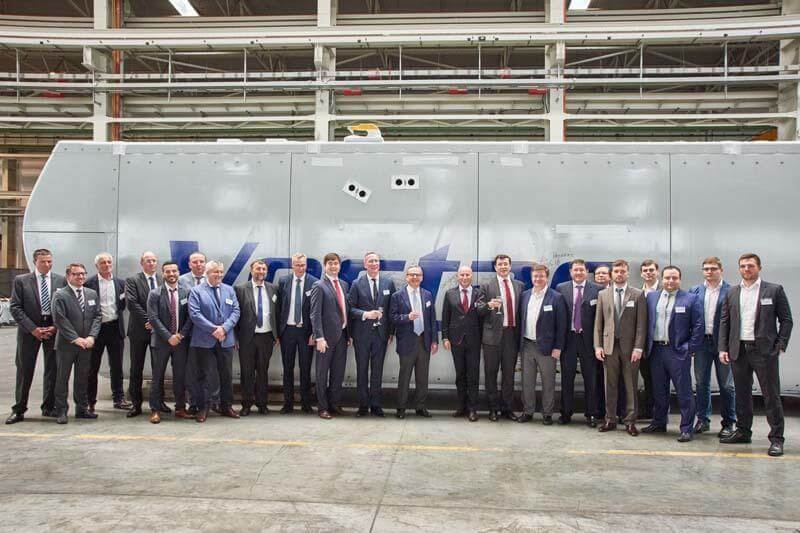 April 18, at the Liebherr plant in Dzerzhinsk, Nizhny Novgorod region, Vestas Manufacturing Rus and Rusnano Management Company LLC officially launched the production of nacelles for Vestas wind turbines. This is the first production of components for wind generators, created in Russia. More than 350 million rubles were invested in the industrialization and about 50 jobs were provided. At this site, Vestas intends to produce nacelles for its wind generators of the 4 megawatt platform, which, according to the company, will provide it with market leadership on a mid-term horizon.

Gleb Nikitin, the acting Governor of the Nizhny Novgorod region, noted the high importance of launching the production of wind power equipment for the region, and expressed readiness of the region to support not only the production, but also the construction of wind farms in the Nizhny Novgorod region. Future belongs to the renewable energy sources, he noted.

Anatoly Chubais, The Chairman of the Management Board of Rusnano Management Company LLC, who delivered a welcoming speech via the video call, in his turn, noted that great pains were taken and a lot of effort was put in this project. “The first task is the actual construction of wind power facilities in the country; the second is the industrialization for the production of equipment for this industry. There was a unique occasion when the government’s yearslong efforts coincided with the business community agenda.”

According to Nils de Baar, the president of Vestas Northern and Central Europe, who was present at the opening of the industrial site, with such close collaboration, the company expresses its readiness to work in the Russian market. “For Vestas, this assembly line is a real milestone. This is an achievement that will foster the investments in the regional economy in accordance with the requirements of Russian legislation. We are ready to work in the Russian wind power market, because the Russian market is the fourth largest electricity market. And this stage will mark an important achievement, which is the result of genuine cooperation and partnership. After participating in an open tender, this company received the first order for the production of wind turbines, and we entered into a framework agreement with the Russian Wind Development Investment Fund (joint venture of Fortum OJSC and Rusnano).”

A pleasant moment for the participants of the ceremony was a traditional signature ceremony at the first wind turbine nacelle, which will be delivered along with the others to the 50 MW wind farm that will be built by joint venture of Fortum OJSC and Rusnano in the Ulyanovsk region next year.

On the margins, the Chairman of RAWI discussed with Vestas executives and the representative of the Ministry of Industry and Trade the possibility of expanding the list of Russian suppliers of wind turbines components. This list may include suppliers of heavy castings, transformers, electronic equipment, aluminum products and composite. The company’s top management expressed readiness for Vestas to participate in the first Russian national exhibition ARWE’2019, which will be held in Ulyanovsk next year. The event will be the first platform whereon massive generation equipment for wind power and equipment for wind farm construction would be presented in full-scale.

Vestas has been already preparing the production operation of blades in the Ulyanovsk region at the Aerokomposit plant and towers for wind turbines in Taganrog. To date, there are three manufacturers of wind generators preparing the production of their own components on the Russian wind power market: Vestas, SGRE (Siemens-Gamesa Renewables) and Lagerwey. The market expects the emergence of other producers of wind power generators, since Russia is one of the most promising and yet insufficiently mastered markets, offering broad production opportunities and ambitious prospects for development.